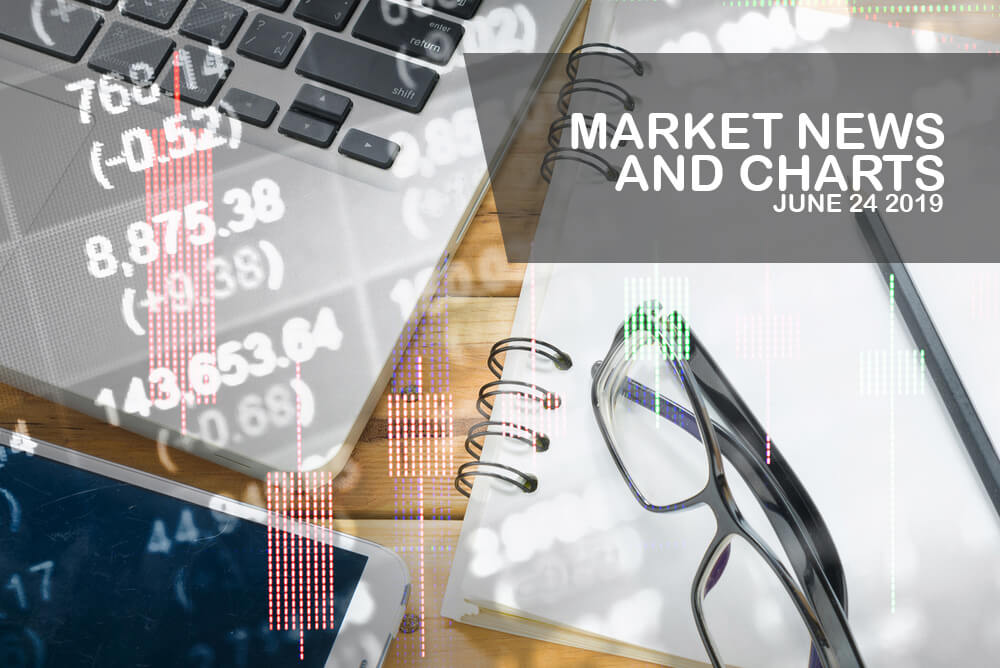 The pair was seen to bounce back from a support line, sending the pair lower towards its previous highs. The U.S. blacklists 5 Chinese supercomputing groups ahead of trade talks, saying they pose a threat to national security and cutting them off from critical American technology. The decision could complicate talks on June 28-29, 2019, during the 2019 G20 Leaders Summit in Osaka, between President Donald Trump and his Chinese counterpart, Xi Jinping, aimed at de-escalating a trade dispute between the world’s two biggest economies. Trump has imposed 25% tariffs on $250 billion in Chinese imports and is preparing to target another $300 billion, extending the import taxes to virtually everything China ships to the United States. China has retaliated with tariffs on U.S. products. It was noteworthy that during the 2018 G20 Leaders Summit in Buenos Aires, the two (2) leaders agreed to a trade truce.

The pair was expected to bounce back from the uptrend channel support line after it finished the “Cup and Handle” formation. The fallout in the relationship between the United States and Turkey might be the beginning of U.S. intervention in the country. Turkey’s opposition has dealt President Recep Tayyip Erdogan a stinging blow by winning control of Istanbul, the country’s political center, in a re-run mayoral election, delivering a message from voters unhappy over his ever tighter grip on power. Ekrem Imamoglu of the Republican People’s Party (CHP) secured 54.21% of votes, a far wider victory margin than his narrow win three months ago. The previous result was annulled after protests from Erdogan’s Islamist-rooted AK Party, which said there had been widespread voting irregularities. The decision to re-run the vote was criticized by Western allies and caused uproar among opponents who said Turkey’s democracy was under threat.

The pair will continue its uptrend movement after finding a strong support from a major support line. Following the win of Germany’s European People’s Party (EPP) during the recently held European Parliamentary Election, the Germano-Franco had cemented their leadership inside the European Union. The strong presence of Germany and France, and the impending withdrawal of the United Kingdom from the European Union can cause problem for New Zealand after it signed a post-Brexit trade agreement with the UK, while maintaining its existing trade relations with the EU. The proposed integration of British Commonwealths, known as the CANZUK (Canada-Australia-New Zealand-United Kingdom), will force the European Union to rally its influence with countries who maintain an existing trade relation with them to prevent the United Kingdom from forming a political alliance.

The pair was seen to further go lower in the following days to complete the “Descending Triangle” pattern. Australia and New Zealand’s relationship was on its lows after the later shifted its foreign policy from being a dependent to the Western Allies to someone who’s neutral with global issues. Australia made the first step to move away from New Zealand after it proposed to move back its citizens with Kiwi roots back to New Zealand. Now, New Zealand was making a move to retaliate with Australia after New Zealand’s Prime Minister Jacinda Ardern has slapped down speculation notorious British child killer Jon Venables could be settled in her country. It follows British media reports the now 36-year-old Venables could be relocated to New Zealand to start a new life. Australia and Canada were also mooted as possible destinations, but Ardern is the first leader to respond to the reports.

Apple and Its App Review Process for Apps