Mercedes Benz, which is a German company specializing in luxury cars. The diesel emissions scandal started when another German automaker Volkswagen found guilty of manipulations regarding the diesel engine tests. However, the scandal is far from being over as other German carmakers are facing the investigation to identify the whole extent of this scandal. The German authorities investigate Mercedes Benz and its activities. Federal Motor Transport Authority (KBA) is in charge of the inquiry.  On Sunday Daimler AG announced that if found guilty the possible fine for this violation will be quite a significant sum of money.

Daimler AG is cutting the revenues for this year, and diesel emissions scandal also played a role in this decision. The company’s shares at the Frankfurt stock exchange fell by almost 4% on Monday. The earnings for 2019 are expected to be at the same level as in 201, which was $12.6 billion, it is a blow to the carmaker’s plans. This year Mercedes Benz planned to increase the revenue, but right now it is unlikely to happen. It is not the first episode in this investigation. In 2017 German prosecutors searched company offices as part of the ongoing inquiry. Apart from the problems in Germany Daimler AG has another issue which is the class-action lawsuit in the U.S. along with their partner company Bosch. According to the lawsuit the company tried to deceive the U.S. regulators. The investigation initiated by the KBA will continue in the future.

The extent of the scandal 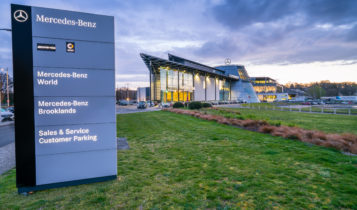 The loss of revenue is a serious problem, but in the case of Mercedes Benz, it is not the only one. On Friday, KBA announced the recall of 60,000 SUV equipped with the technology which is artificially reducing the emission level. Mercedes GLK SUV is not the only model which facing the recall as other models such as C-Class and E-Class might soon join this list. An overall number of cars might increase to 700,000 according to the latest information. Last year in June German authorities issued a recall of 774,000 diesel cars in Europe. The reason for this recall was the use of prohibited devices which are manipulating the level of emissions.

Dorothee Cresswell from Barclays Equity Research underlines another aspect of this problem. She thinks that new CEO Ola Kaellenius should address two significant issues. The first one is the operational challenges, and the second one is the corporate culture of the company.

Sunday announcement also included the information regarding another Mercedes Benz division which is producing vans. The bad news for the Daimler AG is that van sales are not promising and will bring no profit at all. This year a return of sales is of minus 2% to minus 4%.

The diesel emissions scandal for the Mercedes Benz is not as bad as it was for the Volkswagen group. The cost of this scandal for Volkswagen was $34 billion which the company paid in fines and other associated expenses.

Mercedes Benz is one of the most famous car makers in the world. This scandal negatively affected its reputation, but the company can regain the trust of customers and investors.