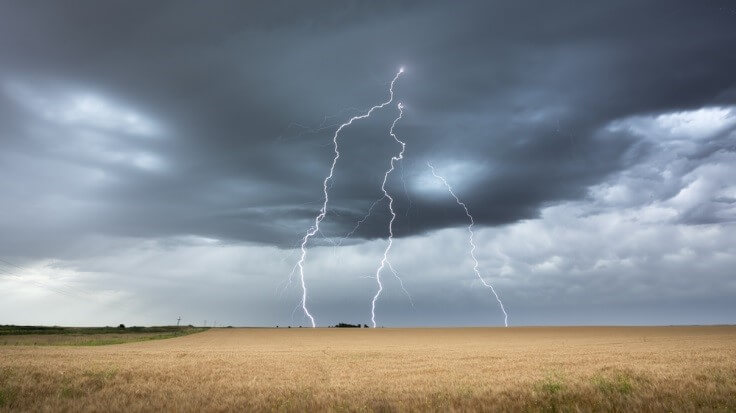 Argentine storms have been enveloping a major eastern part of the country. They will likely disrupt next season’s wheat crop planting schedule.

Heavy rains have loomed over two major wheat-producing provinces of Argentina—Buenos Aires and Entre Ríos—affecting the country’s production of the commodity.

Both provinces make up around 45 percent of 6.48 million hectares. All from the estimates of planted and sown with crop in the 2019 to 2020 harvesting schedule.

The South American nation, which is one of the major exporters of wheat grain worldwide, has already completed 31 percent of the total wheat planting as official data have shown.

Many believe in the effect of these intense rainfalls. They have reached the 150-millimeter level—6 inches—over the weekend in certain areas, delaying next season’s cycle.

“There are areas in Entre Ríos and Buenos Aires that were already doing planting work. That will now be delayed,” said Germán Heinzenknecht, a meteorologist at the Buenos Aires-based Applied Climatology Consultancy.

The Buenos Aires Grains Exchange (BCBA), however, has a positive outlook on the current weather interference. They point out how the rains have improved the water reserves.

The BCBA said in a statement that the rains in the southernmost parts of the country have improved its water reserves. Also, “If good climate conditions hold in the rest of the planting window, it could result in an increase of planting expectations.”

“There is a broad sowing window, so a producer who was planting can just stop and continue in a week, so the impact isn’t too bad,” Heinzenknecht added looking into the brighter side of the situation.

US Wheat Exports Down By 42 Percent

Mexico remained to be the largest importer of US wheat in the marketing period that began on June 1.

A total of 792,000 mt have been exported by Mexico, while 743,000 mt were imported by the Philippines. These are according to the official US Wheat Associates data.

According to the Buenos Aires Grains Exchange (BCBA), the rains might also allow farmers to plant wheat on more land than before.

However, as the intense weather continues to loom over and disrupt the farming activities, a delay on the plantation cycle of wheat is will certainly happen.

On the other hand, some of the country’s corn supply is already is in the process of collection. Those will be safe from harm due to its high tolerance to water.

According to government data, farmers have already harvested 59 percent of the 2018 to 2019 season’s corn plantations. Cereal production, including the grains not sold by farmers, are at a record of 56 million tonnes.