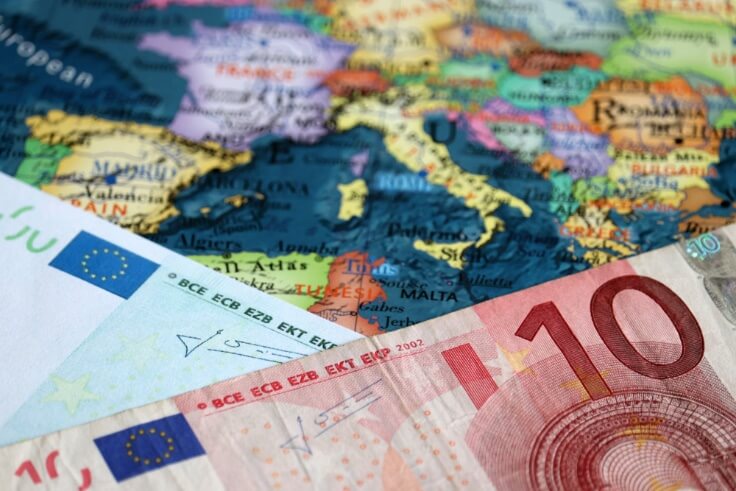 Inflation in the eurozone turns negative for five months

According to data by the Eurostat, the statistical office of the EU, the year-on-year inflation rate in the eurozone stood at -0.3% last December, in line with the data for November. Thus, the deflation period extended in the region to five consecutive months, in which two-thirds of its members registered price falls.

In the European Union as a whole, the year-on-year inflation rate stood at 0.3% in December, one-tenth above the reading for November.

The price drop observed in December in the eurozone is mainly due to the fall in energy prices. They dropped by 6.9%, compared to the 8.3% drop in November. On the other hand, the cost of fresh food increased by 2.1%.

Likewise, services increased in price by 0.7% year-on-year in December, one-tenth more than in the previous month, but non-energy industrial goods fell by 0.5%, after a fall of 0.3% in November.

Thus, by excluding energy from the calculation, the year-on-year inflation rate in the euro area in December stood at 0.5%, one-tenth less than in November, while also leaving out the price of fresh food, alcohol and tobacco, the core inflation rate remained at 0.2%.

Among the 19 countries in the eurozone, a dozen of them registered year-on-year price falls in December. The most pronounced decreases were observed in Greece (-2.4%) and Slovenia (-1.2%). Meanwhile, only five countries had positive inflation rates, with Slovakia leading with a 1.6% rise. In the case of France, prices were stable.

When will interest rates rise in the US?

Analysts think that in the US labour markets still have a long way to go before they recover. And even with inflation rising, the Fed will not preemptively tighten monetary policy in response.

Inflation has been below the 2% target for the past decade. The central bank has promised to exceed that level for some time to restore its credibility.

The Fed has kept interest rates close to zero since last March and has indicated that it will hold them there for years to give inflation time to beat the target.

The central bank also promised to continue buying Treasuries and mortgage-backed securities at their current rate of $120 billion a month until it sees substantial progress toward its goals of full employment and price stability.

Jerome Powell, the central bank’s chair, stated that the Fed would certainly raise interest rates when the time comes. However, that time is no time soon.

The stock market soared on Tuesday. What caused the rally?