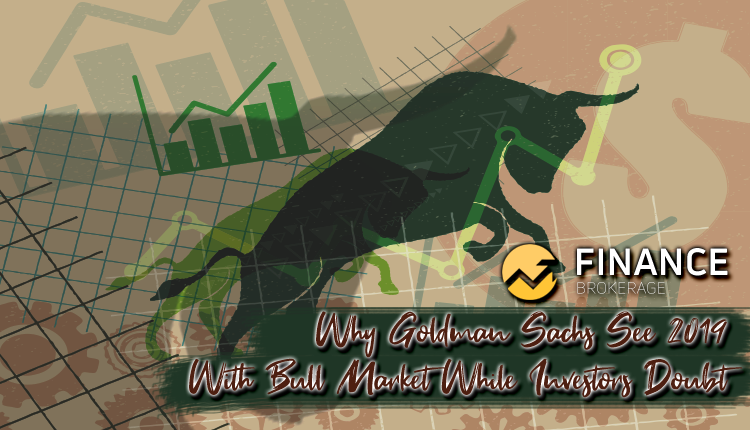 Goldman sees three possible scenarios for the S&P 500 for 2019. All with notable chances – two with bullish cases and one with a bearish case. US Weekly Kickstart reports the Goldman’s three notable scenarios. Take note of the list below.

Let us first focus on the investors’ bearishness view. Goldman says, “Scores of recent client meetings indicate that many investors believe the US economy will enter a recession in 2020.” Goldman also writes, “A key source of investor concern stems from the fact that, since 1928, the S&P 500 index has fallen by more than 10 percent in 25 percent of the years before the start of a recession.”

Looking at the P/E ratio, it peaks about six to nine months upon the onset of a recession. The report says, “Our downside scenario of 2500 reflects the possibility that investors begin to price a potential 2020 recession by the end of 2019.”

The stress on the market may cause new investors to spoil with the bull market gains from the previous years. That includes relatively deep and prolong reversals preceding to 2018. The new investors could rattle because of the  10 percent improvements or more for the year 2018. With the realization that 2018 is a simple year with a decline of about 2.8 percent for the S&P 500.

Such concern widens toward the face of the fundamental economic strength. Goldman says, “We expect US economic growth will decelerate but remain positive for several years.” That to note revenue growth of the S&P 500. Which tend to follow GDP growth, estimates that the S&P sales could increase by 5 percent this year. Considering the earnings, upon measures by EPS, could increase by 6 percent. Higher possibilities assigned by the Goldman to base and turnaround the scenario.

Goldman explains, there are other big reasons for the investors to keep bullish. An explanation says, “Rather than slowly cresting, equity returns are typically strong at the end of bull markets. Since 1930, equities have posted a median return of 35% during the last two years and 16% during the 12 months prior to reaching a pre-recession peak.”

Despite all that, there’s one thing away from the certain – the level of stock valuations for 2019. That, Goldman says is the main variety in their three scenarios. An estimation on forwarding P/E ratios of the S&P 500 at the end of 2019 is at sixteen times (3% above last years level). With eighteen times for the turnaround case, and fourteen times in the downside case.

Even with Goldman Sachs’s positive views, there are various factors contradicting. That includes negative fundamentals, bull market, and economic expansion. Goldman then suggests investors to overweight in utilities and communication service stocks. All that tends to outperform if GDP decelerates.