What is LCoin, and what does it all refer to in the crypto world?

Have you ever thought about what LCoin is exactly and why it has recently reached the center of attention in the crypto community and among many other enthusiasts? Does it refer exclusively to one specific cryptocurrency, or can it represent more than one?

If you are part of the crypto universe or like to read about it from time to time, you must have noticed the extent to which LCoin is mentioned.

Whether you have just stepped into the world of Blockchain technology or have some experience, you are probably interested in where so much interest in LCoin comes from and what it represents.

To begin, we will give you the most basic definition and explanation of what LCoin all refers to. In the other text, you’d get to know more about Litecoin, Liberty Coin, and LeagueCoin. So, let’s begin with the first coin that LCoin most commonly refers to, shall we?

LCoin is most commonly referred to as Litecoin (LTC), an open-source software project and a peer-to-peer cryptocurrency. It was released in 2011, only two years after Bitcoin release, by Charlie Lee, a former Google engineer and under the well-known MIT/XX license.

Litecoin is exceptionally similar to Bitcoin, almost identical since any central authority does not control it, and both are based on an open-source global payment network. It became one of the first altcoins that have been derived from Bitcoin’s original open-source code.

Even though it’s also referred to as a “lite version of Bitcoin,” LCoin, or Litecoin, has always been viewed as a strong competitor from Bitcoin for many other reasons. Considering how much the crypto market has evolved over the past couple of years, and as much altcoin emerged, Litecoin no longer remained the only “competitor” to Bitcoin.

So, what are the initial differences between Litecoin and Bitcoin exactly?

The main differences between LCoin and Bitcoin

Although LCoin, or Litecoin, is almost identical to Bitcoin, there are some crucial differences that we’d like to highlight here:

Litecoin utilizes scrypt in its proof-of-work algorithm, which represents a memory-hard function that requires more memory than an algorithm that’s not memory-hard.

The network of LCoin aims to process a block every two and a half minutes rather than 10 minutes of Bitcoin. Litecoin confirms transactions 4x faster than Bitcoin.

Litecoin as a method of payment

LCoin, which refers to Litecoin, is used as an avenue for paying individuals from all over the world without any need for an intermediary to process the transaction. When it came to it as a payment method in the early days, Bitcoin correlated extended payment patterns.

Even though some people would think of Litecoin’s payment patterns converging to Bitcoin, the reality is that there is little correlation between the payment patterns of LCoin versus Bitcoin today. These two patterns will continue to diverge over periods.

A brief history of Litecoin

On 7 October 2011, Charlie Lee, then employed as an engineer at Google, released Litecoin via an open-source client on GitHub. Six days after its release, the Litecoin network went live. It was developed as a source code fork of the Bitcoin Core Client.

What was primarily different in comparison to Bitcoin and unique with Litecoin was:

In November of 2013, the aggregate value of Litecoin excessively increased, including a 100% leap within one day. Four years later, Litecoin was the first of the top 5 cryptocurrencies by market capitalization to adopt Segregated Witness. In 2020, users could purchase derivatives of Litecoin on PayPal.

Here are the most critical facts about Litecoin you probably didn’t know before: 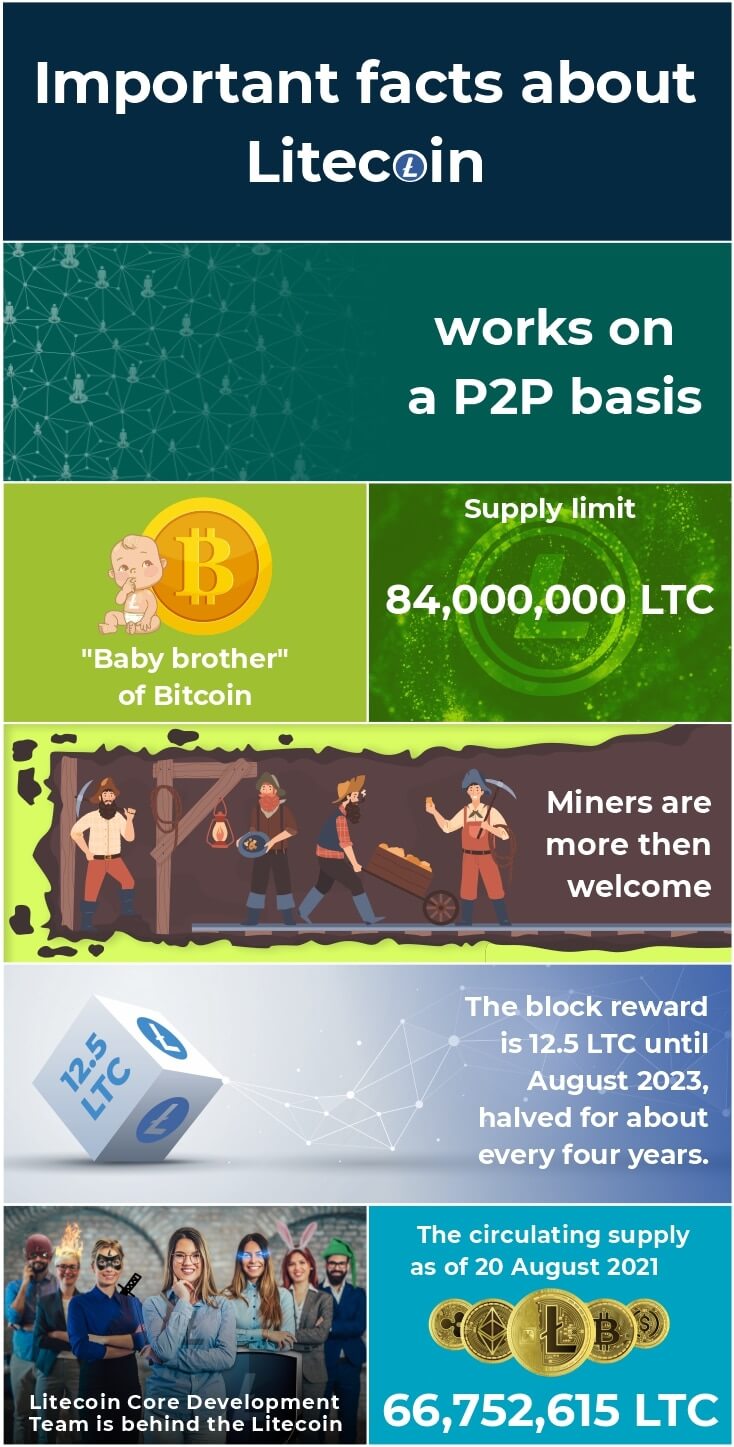 Liberty Coin or Liberty Token is also something that refers to the term “LCoin.” Although LCoin will often be associated with Litecoin, Liberty Coin can also be synonymous with LCoin. Liberty Coin was founded in 2014

The simplest definition of Liberty Coin is that it represents a Proof of Stake coin that has initial mining using Proof of Work X-11 Algorithm, similarly to Darkcoin. Liberty Coin intends to become the first PoS coin anonymous based on the “LibertySend” upcoming feature. The symbol of Liberty Coin, under which you will locate it more often on google, is XLB.

This coin alleges not to have any pre-mine coins of Initial Public Offerings. Thus, the distribution would be a fair one, for sure. Initially, the plan was to implement the ZeroCoin libraries onto Liberty Coin. However, that idea didn’t come to fruition for other reasons.

About the Liberty Coin market

The platform allows all buyers to purchase anything that sellers offer. Nonetheless, to convert their digital artwork into Non-Fungible Tokens, these sellers have to mint the token through the Liberty Coin DApp. In doing so, with the Liberty Coin software, all users would transfer their NFTs between different wallets.

The marketplace uses the Binance Blockchain Network, so whenever one transaction between a seller and a buyer becomes successful, transaction fees go to the Liberty Coin Network.

What is the Liberty Coin’s mission goal?

It’s important to understand that Liberty Coin’s Mission Goal, which is even highlighted on their whitepaper, is, as it is written, to “Make it easy for the average person to interact with their Web 3.0 easily.”
Thus, the Dapp platform, which uses the Binance Smart Chain, allows digital artists and content creators to mint and sell customized crypto assets that refer to the authentic ownership of their digital work.
The tokens generated on the Liberty Coin Dapp are the Non-Fungible Tokens or NFTs. Every NFT represents a unique asset that’s non-interchangeable and is unlike any other cryptocurrency. Non-fungibility is the word that refers to the unique property.

Liberty Coin to be a decentralized autonomous organization

We can see that Liberty Coin, also referred to as LCoin, aims to be a decentralized autonomous organization known as the DAO. All decision-making rights will belong to the Liberty Community.

On Bounce Finance, at the moment, Liberty Coin is conducting the public sale of 10% of its total supply for $0.000927. The current XLB’s rank is 6,465. The Algorithm of Liberty Coin is X-11, while its ProofType is Pow/Pos.

Remember, the Block time is 60 seconds. POW coins are limited to 16.5 million, while the Proof of stake possesses a 1% annual inflationary factor.

In addition to Litecoin and Liberty Coin cryptocurrencies, there is another one to which the abbreviation LCoin can refer. It is a LeagueCoin, or LOL, representing a cryptocurrency that’s also deployed on Binance Smart Chain.

From all this text about LCoin, we conclude that the term first and foremost associated with “LCoin” is Litecoin. However, LCoin, in addition to Litecoin, can also refer to Liberty Coin and League Coin.

So, we have three options of LCoin:

When you hear the term “LCoin” somewhere again, you will know that it is an abbreviation that can refer to one of these coins. However, it is most often Litecoin. Of course, with this text, you realized how important it is to understand that each of these L coins is different and can be utterly different crypto.

Therefore, carefully read the research, and use actual symbols, such as LTC, XLB, and LOL, to understand which cryptocurrency is in question.