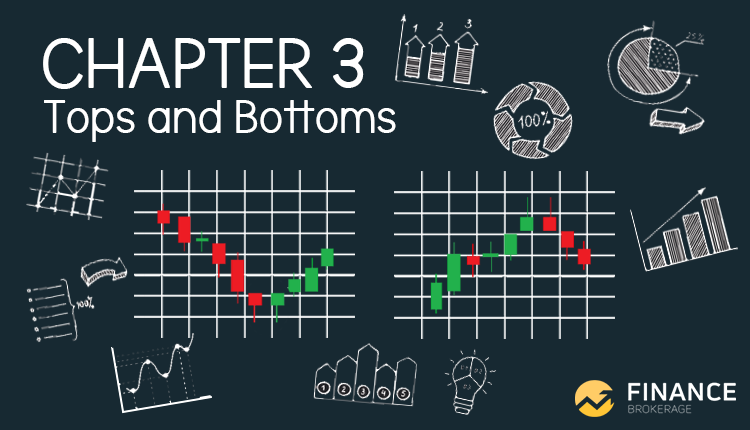 In a VSA charting, the trend channels’ highs and lows possess their own significance. Below are the points that can be applied to any chart.

Check out this chart below, as you can see there is a distinct upward trend. Further, this also showed how both of the principles put at work.

On the other hand,

The first indication that you have a potential trend change is when you see the first lower up in a bull move and the first higher bottom in a bear move.

There are several chart patterns that show the possible emergence of a trend reversal. The head and shoulders double or triple tops, the cup and handle are some of the visible patterns. The cup and handle present a rounded top or bottom which is more tradable.

During an uptrend, the price halts, and reverses, as well as the double or triple times occurrence of the same price collectively construct the double and triple tops. This shows the installation of momentum as the price is unable to produce “higher highs.” Moreover, this could only gather a parallel to the previous rally.

Meanwhile, the formation of inverse head and shoulders occurs during a downtrend when the price makes a lower low then followed by a higher low. This, consequently, makes the creation of three points mimicking a shoulder, a head, and another shoulder’s appearance.

In this pattern, selling a short when the price places below the retracement lows is its traditional way. Another way could be buying a short when the price rallies, within an inverse head and shoulders pattern, above the retracement highs. Most of the time, the lows and highs within the pattern can be connected. This would form a trendline which is called the neckline. There would be an entry which can be taken during the movement of price through the neckline.

Another reversal pattern is the cup and handle. The bottoming pattern is more popular compared to a cup and handles topping pattern in the stock market. The formation of this pattern occurs when there’s a slow decrease then, would be creating a rounded bottom form. The price rallies to a section where a decrease started, pauses or pulls back. Then, it would proceed to draw near higher again. When the price breaks exceeding the formation’s handle, then a long trade would be taken after.

Here are some tips that you may want to use:

–    Old trend lines may be used in successfully locating support and resistance most especially when these trends are clustered.

–    You may also want to compare two or more time frames. You can see trending across a longer and shorter timeframe.

–    The potential resistance’s movements are represented through trend lines. Bear in mind the specialist or market-makers take efforts to penetrate resistance. It is a common knowledge that the market takes the least resistance’s track. The areas of resistance are indications whether the line will last or not.

Innovation: Samsung Display Gets US Certification for Screen

How Does Stock Trading Work?

The Differences and Similarities Between CFDs and Futures

The Impact of High-frequency Trading on Retail Investors