On Wednesday, Trump ordered FAA to ground all Boeing 737 Max jets following a growing number of regulators around the world suspending the jet. They include Canada, Hong Kong, Lebanon, Indonesia, Malaysia, Oman, Singapore, and Australia in the wake of two fatal crashes in five months.

The FAA made the grounding decision based on the new satellite data acknowledging that the Lion Air and Ethiopian Airlines crashes had similarities.

However, on Tuesday, the FAA changed its position saying there is “no basis to order grounding.”


Boeing sales are under increasing pressure.

According to the Bloomberg report on Tuesday, Lion Air is planning to switch a $22 billion 737 Max order to Airbus. Kenya is also planning to reconsider tentative plans to place an order.


On Wednesday, Norwegian Airlines- Boeing’s major customer said it expects Boeing to foot the cost of lost revenue from canceled 737 Max 8 flights. VietJet said it would decide on its 200-plane, $25 Boeing 737 Max order after the official investigation is complete.

However, Lufthansa said it had ordered 20 Boeing 787-9 Dreamliners and 20 Airbus A350-900s for long-haul flights. The new aircraft will replace the four-engine planes to be delivered from late 2022 to 2027.

Boeing stock closed up 0.5% at 377.14, reversing losses and ending a streak of seven straight declines. On Monday, shares remain lodged under the 50-day average after falling below it for the first time in two months.

On Tuesday, Boeing stocks flew a round-trip sell signal. Meaning a stock had climbed more than 10% from buy point and then given it all up.

The Boeing Company: Boeing and Brexit dominate the market conversation at midweek 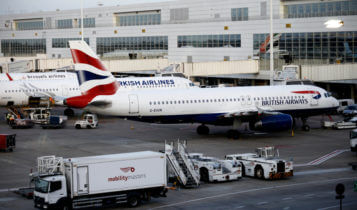 It is interesting to see how the U.S markets continue to hand in there and plow higher. Stocks moved higher on Monday and Tuesday despite last week’s downward trend and later the bad news over the weekend.

The movement could reflect investor confidence and bullish sentiments.

Last weekend’s controversy over the crash of a Boeing (BA) airliner continues, with shares down another 1% before Wednesday’s opening bell. Many countries have grounded the company’s 737 Max 8 except the U.S. However, U.S politicians from both political parties have called upon FAA to ground the airliner temporarily pending further probe.


At least two analysts have lowered their ratings on Boeing stock. They are concerned about the financial impact of the situation.


On Tuesday, the DJIA had a bad day being weighed down by heavy losses from Boeing (BA). About two-thirds of the 30 DJIA stocks rose on Tuesday, but BA’s 6% loss kept the index from gaining ground.

BA’s slide also pushed down the industrial sector. On Tuesday, nearly all the other S&P sectors finished in the green. Leading categories were Health care, utilities, and Energy.

On Tuesday, parliament once again rejected Prime Minister Theresa May’s Brexit plan. According to CNBC report, today and tomorrow, respectively, lawmakers will likely get to vote on whether the U.K. should leave the EU with no deal, or should request a delay to its departure.

The departure date is currently March 29. The GBP, which had been on an uptrend this year, gave back some gains vs. the dollar after the vote. The euro rose slightly.

Meanwhile, the dollar index fell to just under 97. That seemed like a relatively calm reaction to the Brexit news, but the dollar might be worth watching as these next votes take place.

Any jitters in Europe could potentially fuel investor interest in the greenback, which is often seen as a defensive investment.