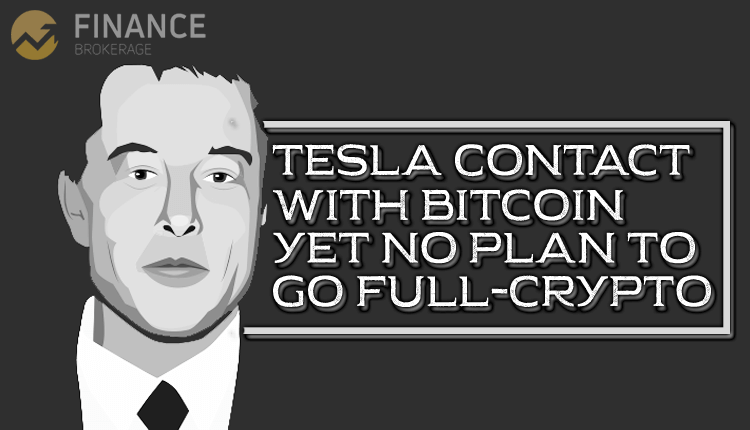 Tesla Contact With Bitcoin, yet no plan to go full-crypto

Elon Musk, Tesla and SpaceX founder on a rare comment says that Bitcoin “is quite brilliant.” He continues noting that “Paper money is going away and crypto is a far better way to transfer value than pieces of paper, that’s for sure, but it has its pros and cons.”

Musk on ARK Investment podcast also gave Ethereum a comment saying, “There seems like there is some merit to Ethereum as well.”

Musk is the wunderkind from Silicon Valley, a billionaire engineer, and an entrepreneur. He works with a major part in digital payments upon merging his online banking services X.com with Peter Thiel’s forming a world-known online payment app – Paypal.

Being a popular entrepreneur/engineer worldwide, commending Bitcoin and Ethereum looks like a powerful endorsement of cryptocurrency. In addition, Musk’s praise for Bitcoin and his idea on cryptocurrency as inevitable financial discovery may help bring dominance towards the financial infrastructure around the globe.

Musk’s hands are full, both working for Tesla Motors and SpaceX. Tesla is a world-known car company while SpaceX is a popular aerospace tech company. Both companies are special companies for Musk. Both are companies that work exactly for what they mainly are with the measurement that they do.

Currently, Tesla isn’t near profitable. Similarly, SpaceX isn’t profitable too. It might take years with daily battle for both firms. But there’s a huge possibility of reaching the pinnacle of their own domain.

On the contrary, the old/veteran tech giants including Microsoft and Google are reaping the profits they worked-well on. Both Microsoft and Google have more than enough extra cards to place in the market game. Both also dive slowly into the cryptocurrency industry, but indirectly.

On the same day Musk comments on crypto, Bitcoin, and Ethereum, Google is the first among tech giants to include Bitcoin symbol to its iOS applications.

It will take years before Tesla Motors hold on to its current business and making a serious venture to cryptocurrency. The firm will mainly be led to crypto because of its specialty in electric batteries and ultracapacitors.

That is to say, that will make various opportunity for Tesla to involve in Proof of Work cryptos such as Bitcoin.