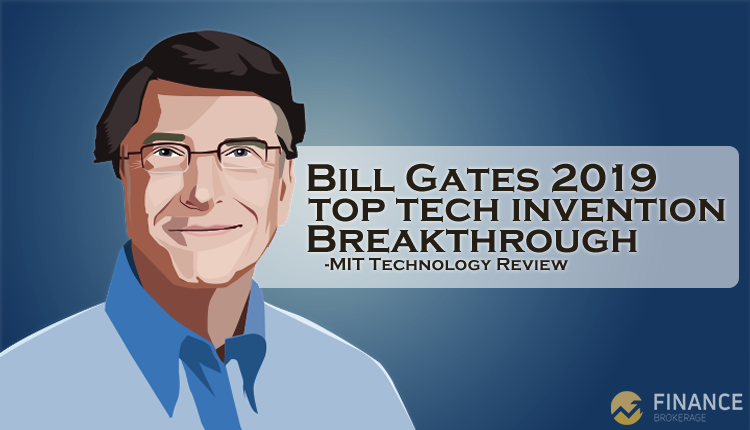 Bill Gates, as founder and developer of the tech giant Microsoft, can be considered as an expert in identifying structural changes. That is to say, from the past, the billionaire tycoon predicted home computers, internet, and operating desktop would become a huge part of everyone’s living.

Last February, MIT Technology Review guest Bill Gates in curating its annual list of “breakthrough technologies.” Above all, this was the first time that MIT invites a guest editor in curating its top list.

Editor-in-Chief of MIT Technology Review, Gideon Lichfield said in a press release, “Bill’s list reflects his belief that we’re approaching a tipping point in humanity’s technological development – from technologies that mostly make life longer to those that mostly make it better. His choices highlight some of what he considers the most important challenges and opportunities of our time.”

Now let us go through the list Gates made. Continue reading now.

As automation and robotics continue to rise in factories around the globe, most of them are delicately handling within its environment. Mainly because most are specifically created for a certain function and could be “clumsy and inflexible.”

Now, this is where Robot dexterity comes in, aiming to fix various issues. To clarify, Robot dexterity works on building mechanical devices including robotic hands and or application of intelligent software. Their works could be with better equipment, dealing with unfamiliar gadgets in the future.

The Fusion, getting billed and favors in the power source because of lesser levels of waste, unlike conventional nuclear energy. In addition these are new designs included in generation IV fission reactor. It has a small modular reactor and fusion reactors, getting close to a breakthrough. Above all, it is promising to reduce carbon emissions. Making power source cheaper and safer.

Meanwhile, to include in Gates healthcare options, he puts his support on the new blood test breakthrough. That of which can indicate premature baby being born. This one included in the breakthrough could widely help save lives of children.

The Gut Probe in a Pill

Firstly, this could mainly use in performing biopsies, this swallowable capsules can project images inside a human digestive system. Secondly, this can help treat infants. This can also support in preventing costly illnesses including environmental enteric dysfunction.

A method developed to eradicate tumor cells with the use of the immune system in the body. Recently, it was reportedly on its peak on becoming a commercialized vaccine, preventing a number of people dying from cancer.

Alternatives from lab-grown and plant-based are creating a nutritional value of meat without destroying the environment. The number of the population grows. As a result, there are more to feed. Now scientists are working to find an affordable solution. Reducing global reliance polluting the meat industry. Subsequently, Gates invest in a company looking for a way to grow animal tissue from a stem cell it called Memphis Meats.

A technology aiming to capture carbon before it comes in the atmosphere now still at its reasonable price might come available soon. Experts consider carbon capture with storage tools could lessen CO2 emissions coming from power stations buying up to 90 percent Gates and two oil and gas companies.

This is a wearable device that could monitor an individual’s hearts. It eases regulation and technological breakthroughs. Meanwhile, Apple Inc. is among the companies approved by the FDA in developing ECG feature on its watches.

The Sanitation Without Sewers

Good sanitation is not accessible for about 2.3 billion people. Now, according to MIT Technology Review, that fact shows a greater cause of potentially deadly bacteria, viruses, and parasites. Energy-efficient toilets now operate even without a sewer system, dealing with waste on the spot helping solve the issue on the matter.

According to MIT Technology Research, Alexa and Siri, still not on the edge of simplifying one’s lives. The devices still are incapable to recognize a few direct orders and could easily be confused. Meanwhile, recent developments try to capture the semantic relationship between words are under development. Aiming to make the machine understand language and be better autonomous.