Oil and gold prices on Monday

Hard and soft commodities play a crucial role in the global economy. It means that when the price of gold, oil and other commodities goes up or down this have a considerable impact on the country’s economy. In the modern world, most countries are connected as the world has become a global village. In this situation, trade disputes and regional tensions pose a serious threat to the global economy. Read more about Gold and Oil prices.

Tensions in the Middle East is an excellent example of how the increased risk of military conflict can influence the price of commodities. Another important issue which at the moment is one of the most significant is the trade war between the U.S. and China. Trade war started over a year ago, but it is hard to say when it will end. All of these mentioned above brings us to the current situation.

The oil industry is in a tough position. The U.S. is the biggest oil producer in the world whereas China is one of the biggest oil consumers. The market instability is hurting the industry. Trade war coupled with global economic issues created additional pressure on oil prices. 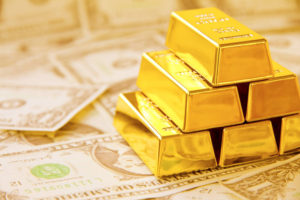 Another commodity that is gold on the contrary gained from this situation. The gold prices increased on Monday. The price of spot gold rose by 0.1% to $1,527 per ounce. It worth mention that while current gold prices are quite high, it was even higher when its price reached $1,554 an ounce. It was the best result since April 2013. Read more about Gold and Oil prices.

The price of another commodity, which is the silver increased as well. Silver’s price increased by 0.9% to $17.54 per ounce.

Another news connected to the gold is that SPDR’s holdings increased by 0.58% to 859.83 tonnes. This happened on Friday. It is worth mentioning that SPDR Gold Trust is the world’s largest gold-backed exchange-traded fund. Read more about Gold and Oil prices.

Last but not least is the news from India’s gold industry. Gold prices also increased in India. For example, the gold prices reached 40,000 rupees per 10 grams in Mumbai. This news once more underlines the fact people are willing to pay more to buy this precious metal.

Oil prices changed several times. At the moment the price is lower than several hours ago. Gold prices increased on August 26 which might indicate the overall situation of the global economy. Read more about Gold and Oil prices.