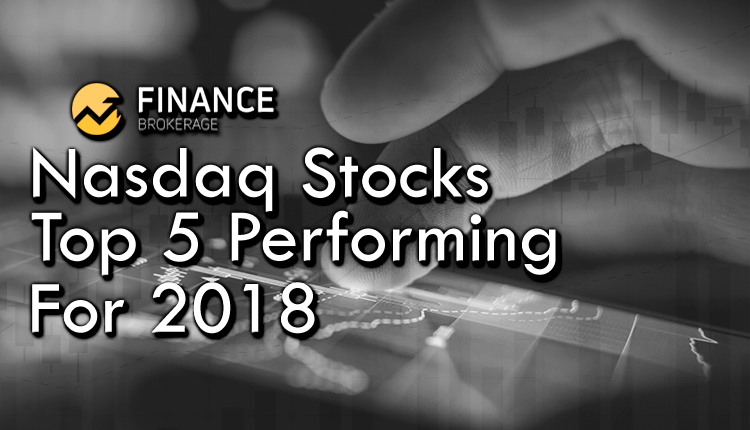 Included within the most popular market stock index is the Nasdaq Composite Index. Comprise of more than 3,300 equities and alike securities such as ADRs. All traded on Nasdaq exchange. Nasdaq is one of the top three most followed American stock market index along with Dow Jones Industrial Average (DJIA) and the S&P 500 index. Nasdaq’s most-valuable companies are Amazon, Apple, Alphabet, Microsoft, and Facebook.

The year 2018’s opening is at about 7,000 above mark, closing with a decline of almost 7.5%. The Nasdaq reach an 8,109 high and a 6,777 year low. Most of its highs are gain during the first half of 2018. Those gains are from consumer cyclical, media sector stocks, and technology which soon revokes in the latter half of 2018. Compare with the previous year (2017), it gains more than 28% annual gain. This year it expects to hit a low around 6,900 by the months April-May, but still hoping to move at about 7,880 around December.

In this post, we’ll list the top performing stocks in the year 2018 within the Nasdaq index. Let us enumerate the top 5 stocks.

Located in Pleasanton, California providing enterprise cloud apps and solutions for human capital management (HCM) worldwide. Workday stocks run modestly during 2018. The big wave comes on the month of November while the company surpasses the early announcement of guidelines for revenue for their fiscal third-quarter 2019. That helps thru a per-share earning gains of about $0.31 cent a share. That double exceeds the analysts’ prediction on the Street.

The second placer on our list of Nasdaq’s best-performing companies – Illumina. The leader of technology sequencing usually uses on understanding genetic changes in disease, healthcare, and medicinal response. During the first half last year, Illumina manages to perform the same ginawith the previous year’s impulse by launching their new desktop DNA sequencing system – iSeq 100. October last year, the company records its highest sales in three years on its sequencing systems following the NovaSeq and iSeq products.

Located in Springfield Missouri, retailing automotive parts, supplies, equipment, tools, and accessories – O’Reilly Automotive. The company garner about 40 percent annual return in 2018. The continues upward run last year comes from the fundamental growth in business with a consistent increase of profit. During April last year, the company’s stock gains more than 10 percent upon the reports of an earnings beat. In October, the company surpasses streets expectection (again). That quarter is the fourth in a row that the company tops the market estimations. As the automobile community grows, the company must continue to look for growth in automotive replacement parts.

Located in New York, mainly works as a diversified media and entertainment company – Twenty-First Century Fox. In 2018, the company generates about 37 percent of profits. The company had a steady start last year. During the fiscal fourth-quarter earnings in August, Twenty-First Century Fox manages to beat the analysts’ expectations. Yet still, the company miss the first-quarter fiscal 2019 results. Reports in November says an increase in affiliate and advertising profits. On  July, Walt Disney Co. secures shareholders nod to buy FOXA amounting to $71.3 billion upon spinning-off some assets. Major development drives a spike in share price towards a level which stock continues to stand and helps the Twenty-First Century Fox to perform well last year.

Standing on the fifth spot doing its best to show its capability  – Netflix. Gaining about 32 percent annual return record in 2018. More and more users subscribes finding out that Netflix original contents are highly engaging. The company starts 2018 with an explosive revenue as of January alone gains 41 percent monthly gain. This stock manages to strike more than 100 percent year-to-date (YTD) profits during June and July.