Moderate risk-aversion prevailed across the Asian markets amid a sense of caution ahead of the key Eurozone/US macro data – data that could set the tone for the markets in the coming days.

Meanwhile, traders refrained from placing any big directional bets heading into the Easter weekend holidays. The refrain left the majors wavering in close ranges while the USD consolidates its recovery across the board holding a steady near 97 mark.

The Aussie enjoyed good two-way businesses for the second day in a row and retested the 0.72 handle. The pop came after the release of mixed Australian jobs and NAB business surveys.

The PBOC report that it is unlikely to cut the RRR in the near term did not trouble the AUD. The KIWI is on the defensive above the 0.67 level amid the recent decline in oil prices on surging US output. Therefore, the Loonie also remained on the offers near mid-1.33s.

The German and the entire bloc’s PMI reports will be closely monitored for fresh signs on the Eurozone’s economic health. The manufacturing PMIs from both economies are likely to show a minor improvement this month. Ahead of these reports, the Swiss trade figures will be published at 0600 GMT.

At 0830 GMT, the key UK retail sales report will be released, which is likely to show that the UK consumer spending rose by 4.6% y/y last month vs. 4.0% booked in Feb.

Later on, at 1345 GMT, the US manufacturing and services PMIs will be published by Markit, followed by the US business inventories data at 1400 GMT. Meanwhile, the speech by the FOMC member Bostic will wrap up a data-heavy Good Friday week.

Weaker-than-expected PMIs, could put EUR/USD on the path to re-test of 1.12. The newfound resistance range of 1.1310-1.1325 will likely be scaled convincingly if the PMI’s jump above 50.00, signaling a rebound in the factory activity.

On Thursday, April 18th at 8:30 GMT, the UK will publish its Retail Sales report for March. Back in February, headline sales advanced by 0.4% MoM. Excluding fuel, consumption rose by a more modest 0.2%.

Market Sentiments: Euro steady as the market waits for stabilization signs in PMIs 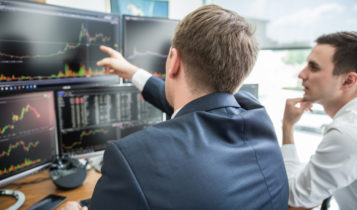 Early Thursday in Europe, the euro was trading sideways against the dollar, awaiting what is likely to be market-moving business surveys from around the region.

Economists are forecasting that the manufacturing PMI will stabilize after sliding from over 60 at the start of 2018 to below 48 in March, well in contraction territory. The consensus estimate is for an uptick to 47.9 from 47.5.

The main risk to that forecast appears still to be in Germany: the Current Conditions of the ZEW economic sentiment index continued to decline this month, despite an upturn in expectations.

The dollar index, which measures the greenback against a basket of six major currencies, was at 96.672, also showing no sign of breaking out of the narrow range it has been in since the end of March. Sterling remained trapped around $1.3044.

The dollar has struggled for direction overnight although it rose 0.5% against the Korean won after the announcement of a new weapons test from North Korea, the first since the breakdown of talks with the U.S. last year.

News that China and the U.S. are aiming for a summit to seal a trade deal at the end of May had little impact, given the lack of accompanying detail.