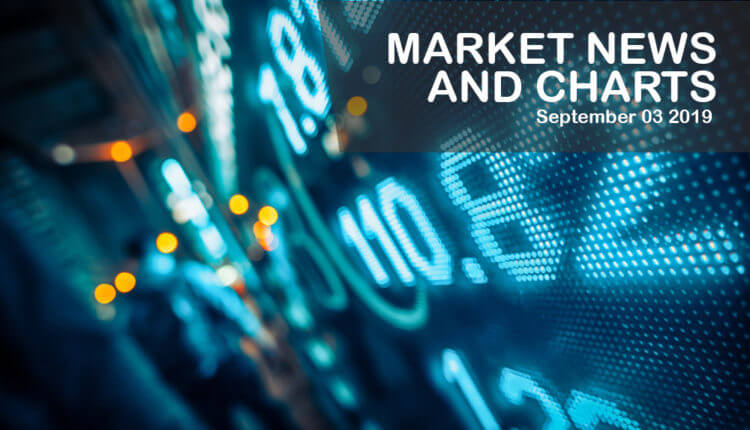 Hey traders! Market News – Below are the latest forex chart updates on financial news for Tuesday’s sessions. Learn from the provided analysis and apply the recommended positions to your next move. Good day and Good Luck!

The pair failed to breakout from a major resistance line, sending the pair lower towards a key support line. South African Rand is flat in today’s trading session as investors and traders await South Africa’s second-quarter GDP results. Analysts were already looking towards a weaker GDP report as South Africa’s debt is spiraling out of control and might cripple the country’s economy if no action will be taken. Aside from this, the U.S.-China trade war is expected to escalate on African futures. In April, the World Bank downgraded sub-Saharan Africa’s 2019 growth forecast from 3.3 percent to 2.8 percent. South Africa is also hit by the nationwide power outages by cash-strapped power firm Eskom. The United States slapped 15% tariffs on Chinese goods on Sunday – including footwear, smartwatches, and flat-panel televisions – while China imposed new duties on US crude oil, heightening fears of a global economic slowdown. Keep reading about market news

The pair is seen to continue to move higher in the following days and to breakout from a key resistance line. U.S. President Donald Trump is once again making an unconventional move after he suggested to bring back Russia in the Group of Seven (G7). Russia was kicked out from the Group of Eight (G8) in 2014 after it annexed the Ukrainian territory of Crimea. Ukraine is applying to become a part of the European Union, which is a member of the group (due to its role in the world economy). Analysts see the move as a preparation for the U.S. to influence the potential successor of Russian President Vladimir Putin. Putin has been Russia’s president since 1999. Despite Putin turning Russia into a military power once again, he failed to address domestic issues, specifically its plunging economy. Russia is one of the nine (9) countries on the verge of recession following the global economic uncertainty and slowdown. Keep reading about market news

The pair is expected to continue its downward movement and move towards its previous low. Secretary of State Mike Pompeo reaffirmed U.S. commitment with Israel saying America will give Israel diplomatic, legal, and military support in any war with Iran following the narrowing relationship between the United States and Iran. Iran had recently threatened to block the Strait of Hormuz, where 33% of world’s liquefied natural gas and 25% of total global oil consumption passes, making it a highly important strategic location for international trade. Under the term of U.S. President Donald Trump, the relationship between the two (2) countries had reached its high, specially Trump’s acknowledgment of Gaza Strip, West Bank, and Golan Heights as Israel territory. This helps Prime Minister Benjamin Netanyahu on his reelection bid. However, this relationship is already being challenged in the U.S. Congress by Muslim lawmakers. Keep reading about market news

The pair will continue its rally after it found a strong support line, sending the pair higher toward its 28-month high. The United States had completely aligned the Visegrad 4 – Hungary, Poland, Czech Republic, Slovak Republic – to its plan. These countries were now recipients of U.S. military equipment that can be used to contain Russia’s rising military and influence in Eastern Europe. Aside from this, the V4 successfully challenged the Germano-Franco leadership inside the European Union with the European Commission President-Elect Ursula von der Leyen visiting the members before she takes her position. The U.S. was also able to pressure the Czech government to dissed China’s telecom giant Huawei as it tries to expand in Europe through the Czech Republic. The Visegard has also recorded the lowest unemployment rate in the European Union, which signals that economic power might have shifted to eastern Europe. Keep reading about market news