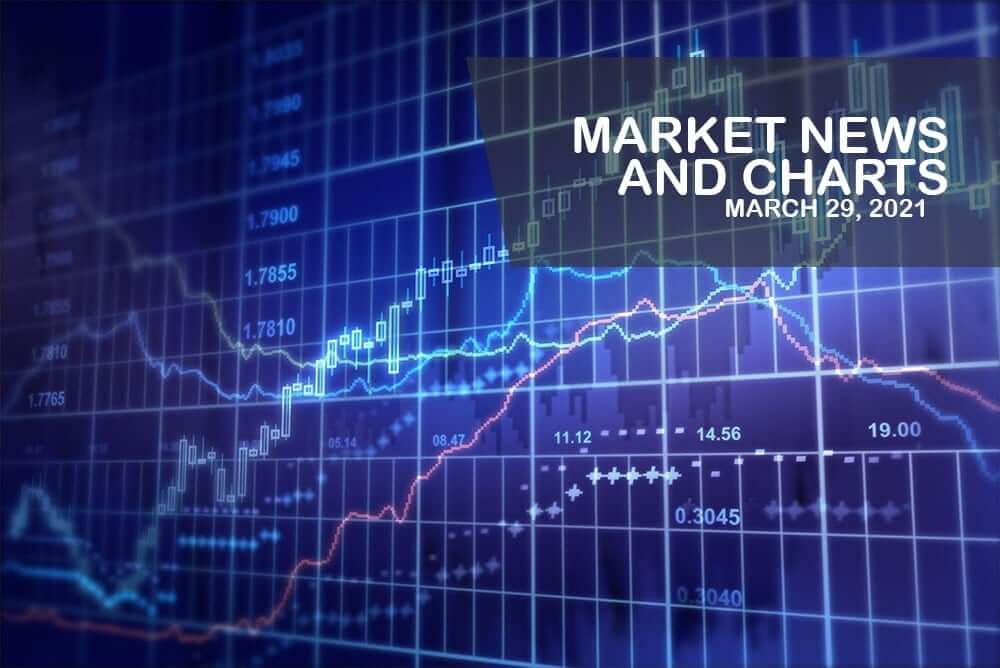 The pair will continue to move higher in the following days towards the 160.000 price area. FTSE 100 shrank on the first trading day of the week to 6,716.55 amid the gradual easing of the UK coronavirus restrictions. Six (6) people are now allowed to gather in parks and other public areas after almost half of the country or 32 million Britons received their first shot of the vaccine. Despite this, analysts are worried that this might result in cases soaring once again especially that the vaccine jabs are not 100% effective. Adding to the pessimism is the stricter lending by commercial banks, which affects the prospect of the UK recovering from the pandemic. The central bank’s consumer credit report is still down by -1.246 billion. Meanwhile, the number of mortgage approvals was down by just 87,700. January’s figure was 98,900 individuals and enterprises. BOE’s Andrew Bailey said he is expecting the UK economy to rebound at the end of fiscal 2021. 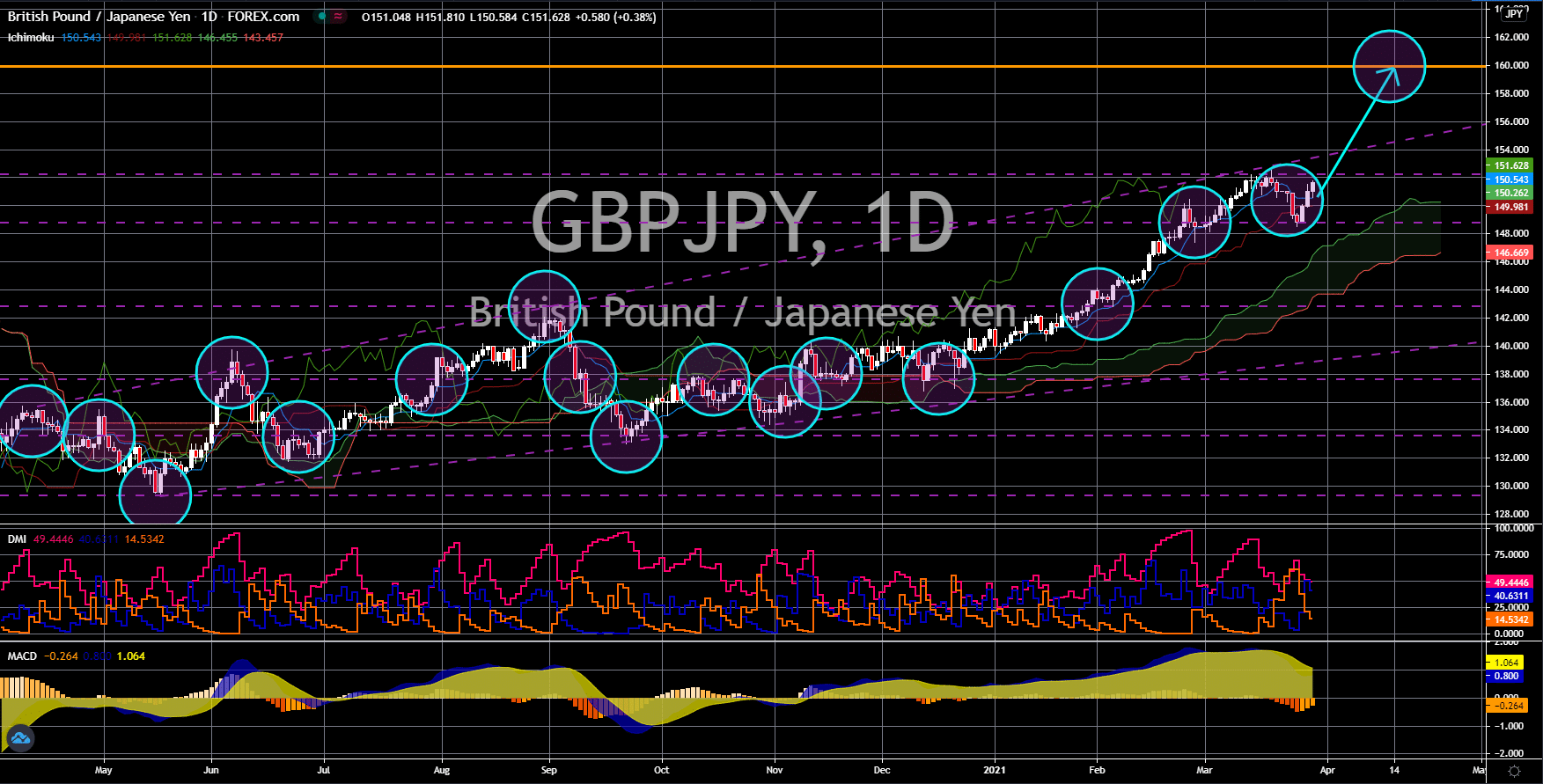 The pair will continue its rally towards 92.500. The Bank of Japan showed a dovish signal on its recent meeting after the central bank rejected an annual ETF buying of 6 trillion yen to further support the economy. In addition to this, the BOJ is preparing for an interest rate cut in the future despite most economies beginning to raise their rates to tame inflation. February’s Core CPI fell by -0.4% year-over-year, which further narrows the gap with its 2.0% inflation target. The current benchmark interest rate was -0.10%, one of the handful of countries with negative rates. The weak readings from Monday’s report, March 29, will also negatively impact the Japanese yen in coming sessions. Retail sales YoY is expected to shrink anew by -2.8%. If the actual figure came near the forecast, it will be the steepest decline in the past five (5) months. Also, while the US reported lower jobless claims of 684,000, Japan is anticipated to post a higher unemployment rate at 3.0%. 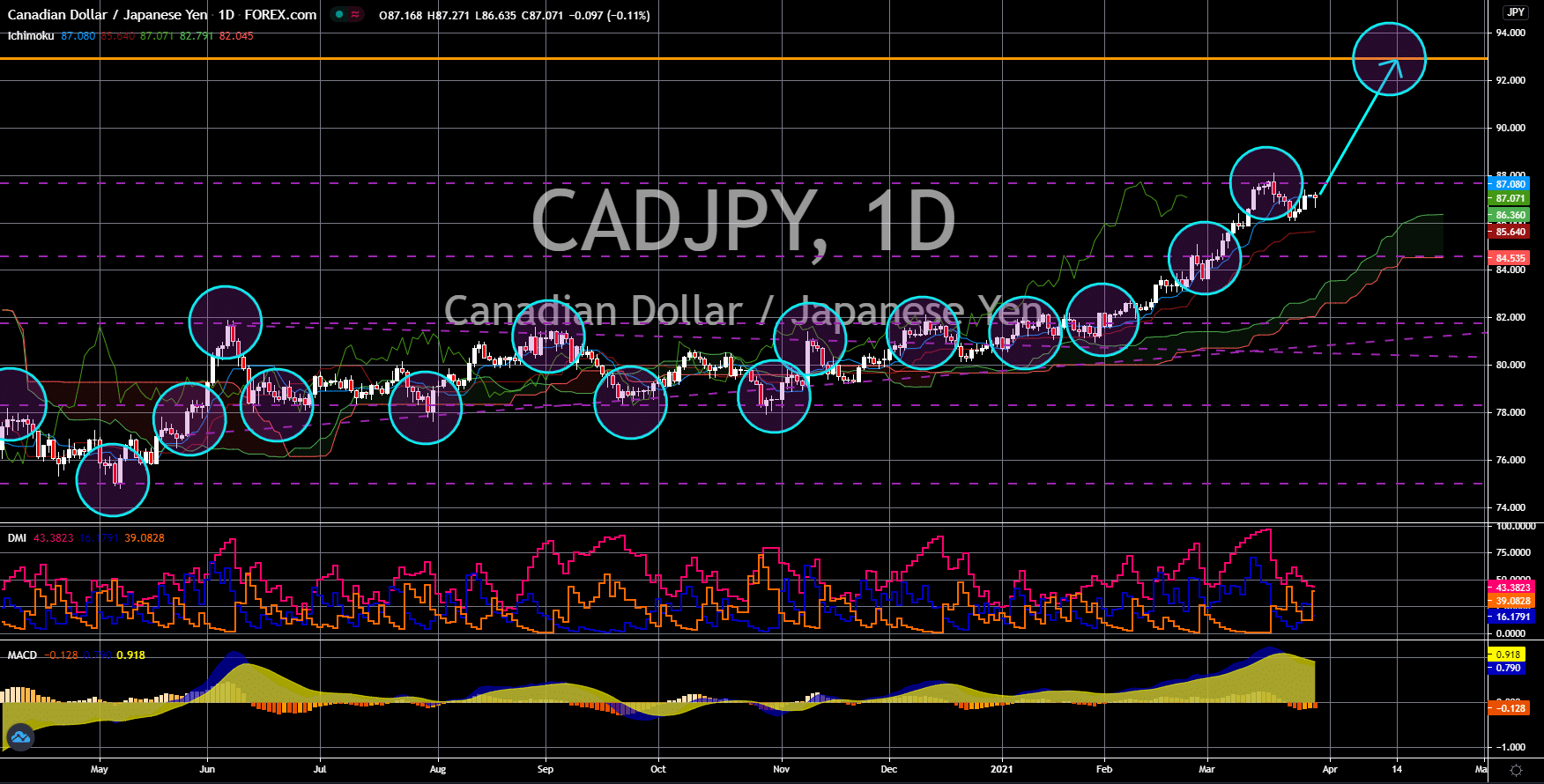 The GBPCHF pair will continue to trade on the uptrend channel. The franc will continue to weaken against the British pound after the Swiss National Bank (SNB) failed to support prices by reaffirming to its -0.75% interest rate on Thursday, March 25. The central bank argued that the Swiss local currency is still highly overvalued. Meanwhile, the housing market showed stability on its recent report. Quarter-over-quarter, the figure is up by 1.34% while house prices advanced by 1.09% in fiscal 2020 after a -1.15% decline in the prior year. This was amid the decline in the economy of -2.9% last year, which made other asset classes attractive than the local currency and the equity market. The State Secretariat for Economic Affairs (SECO) is expecting a robust growth this year by 3.0%, which will continue in the following year with 3.1% economic expansion projection. In total, Swiss authorities injected 59 billion euro to the market to support the economy. 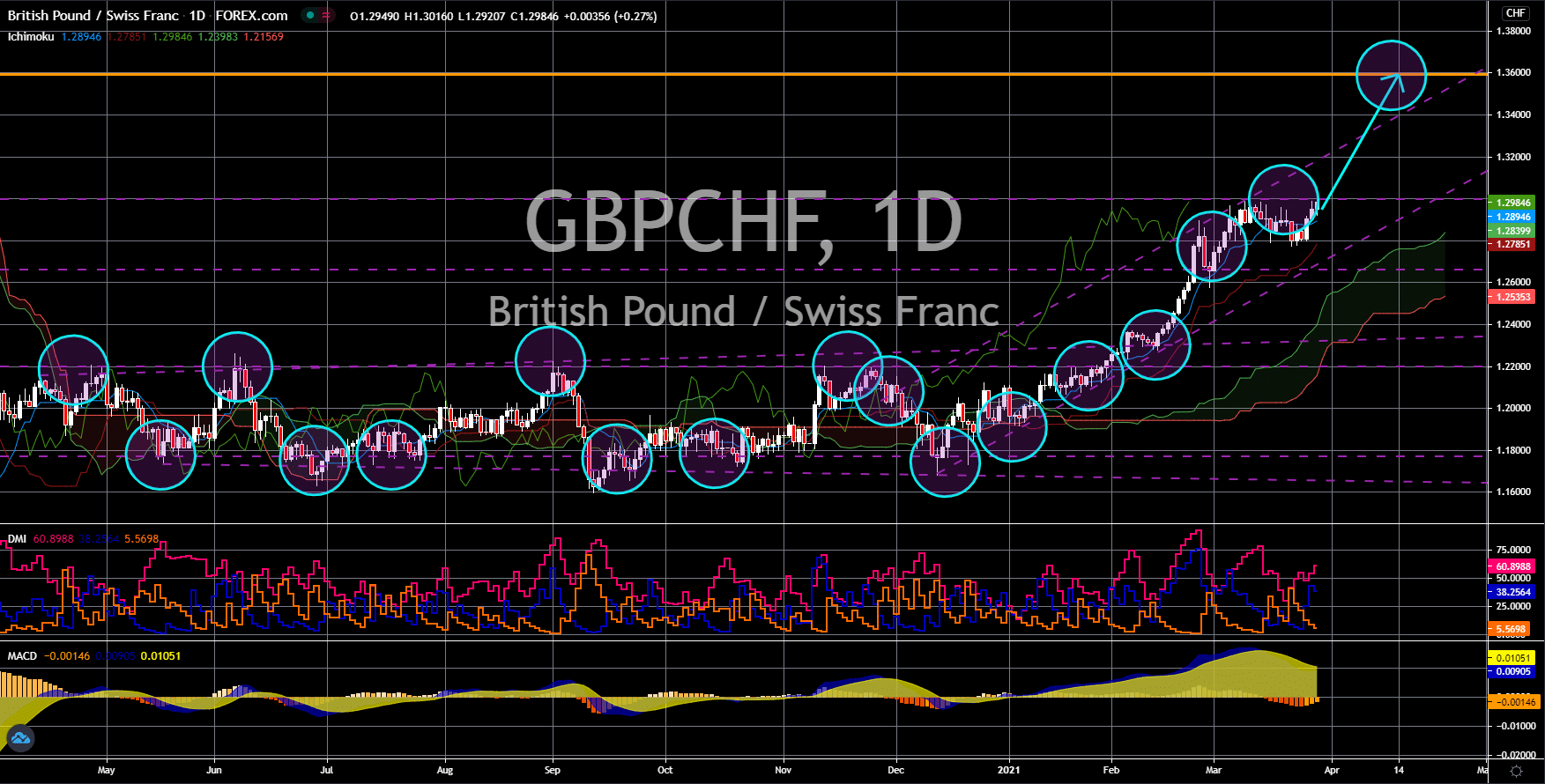 The pair will break down from the 1.52688 support area to reach the key support line at 1.46000. The improving business environment and consumer confidence will lift the European markets. In contrast, the demand for safe-haven currencies will decline, including the euro. All reports from the EU’s largest economy, Germany, on Friday, March 26, were all better-than expected. The Ifo Business Climate Index, Current Assessment, and Business Expectations were all up to 96.6 points, 93.0 points, and 100.4 points, respectively. Figures from one of the bloc’s most infected countries, Italy, also showed numbers above the 100-points benchmark. Business and Consumer Confidence in March came in at 101.2 points and 100.9 points. Meanwhile, Business Expectations posted 100.4 points result. The EU-UK vaccine row is also pushing investors away. The EU threatens to block AstraZeneca’s export to Britain if the UK will not honor the Brexit agreement. 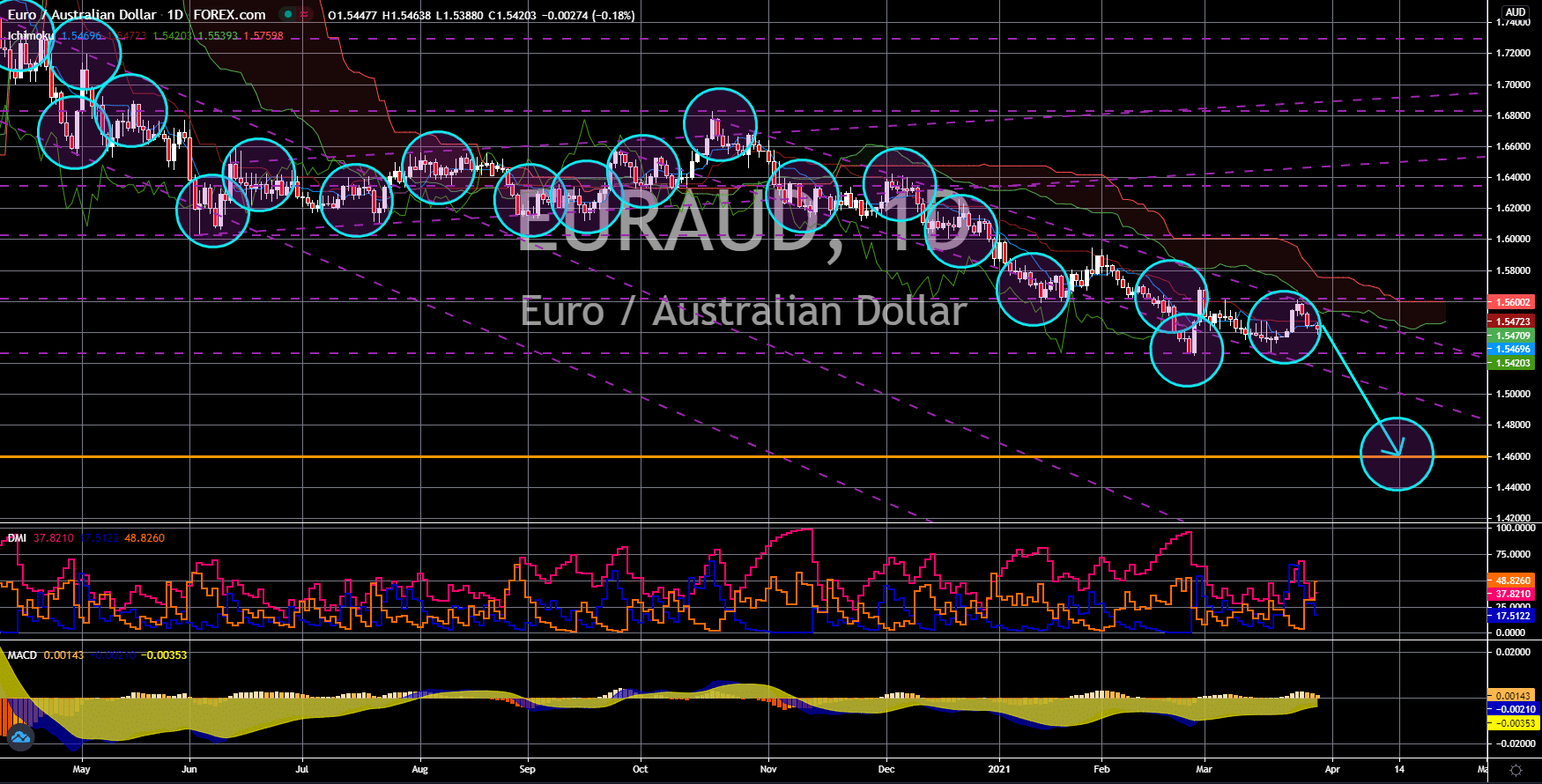