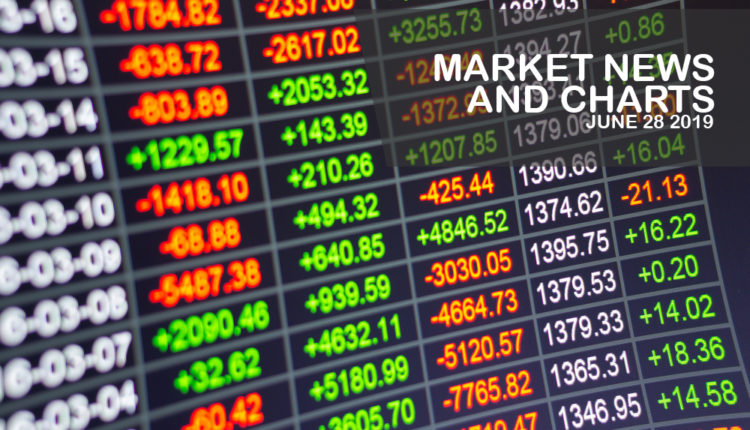 The pair broke down from a major support line, sending the pair lower towards another major support line. South African Rand gained in the past few days as the possibility of another trade truce between U.S. President Donald Trump and Chinese President Xi Jinping was expected following the G20 leaders meeting this June 28-29. Trump threatened that he will impose another round of tariffs by 25% on the remaining $300 billion worth of Chinese goods, which typically covers all Chinese exports to the country. However, cautious should be taken with rand as South African president Cyril Ramaphosa declared that the country’s struggling state-owned power utility Eskom “cannot be allowed to fail” and said he wants more funding to keep it afloat after its cash runs out in October. President Ramaphosa also acknowledged “enormous and severe challenges” including the economy’s sharpest decline in a decade.

The pair gained strength and was expected to test a major resistance line in the following days. In the past weeks, Russia and other central banks had been increasing their purchase of gold and ditching the U.S. Dollar, causing he value of dollar to go down. Analysts were also looking at the G20 Leader Summit this June 28-29 as the leaders of the biggest economies in the world will come together in Osaka to discuss and solve global issues, particularly the trade war between the United States and China and the possibility of a new era of Cold War between nuclear-armed countries. On the recent news, it was reported that Russia’s Google, Yandex, had been hacked by Western intelligence to spy by deploying a rare type of malware. The malware, called Regin, is known to be used by the “Five Eyes” intelligence-sharing alliance of the United States, Britain, Australia, New Zealand and Canada.

The pair was seen to continue its steep decline after it broke down from its support line, sending the pair lower to a major support line. The billionaire-turned-politician President Andrej Babis is currently experiencing a political turmoil on his home country after an estimated 250,000 protesters rallied on the street to demand for his resignation. The protest was the largest since the 1989 velvet revolution that ended the communism in the former Czechoslovakia. This protest will impact the United States influence in the country, specifically if PM Babis decided to step down or be ousted by the parliament. In the recent months, the United States was seen increasing its effort to influence the Eastern and Nationalist bloc following the fall of its relationship to the Germano-Franco led European Union. Andrej Babis was the second richest man in the Czech Republic and had campaigned an anti-corruption stance during the presidential election.

The pair found a strong support from a historical support line last seen in September 2018, which will send the pair higher towards a major resistance line. The European Union was in a good position to negotiate with Czech Prime Minister Andrej Babis after the Czech Republic citizens asked Brussels to stop funding for the country until their prime minister Babis resigned. This was amid the corruption allegations being accused to PM Babis, despite campaigning for an anti-corruption during his election. An estimated quarter a million people marched on Prague last weekend demanding the resignation of their prime minister. Aside from this, his ALDE party group was a subject of a police investigation with its possible involvement in an alleged $1.94 million misuse of EU subsidies. German Chancellor Angela Merkel, one of the de facto leaders of the EU, had tried to reconnect with the Eastern and Nationalist bloc, the Visegrad Group.