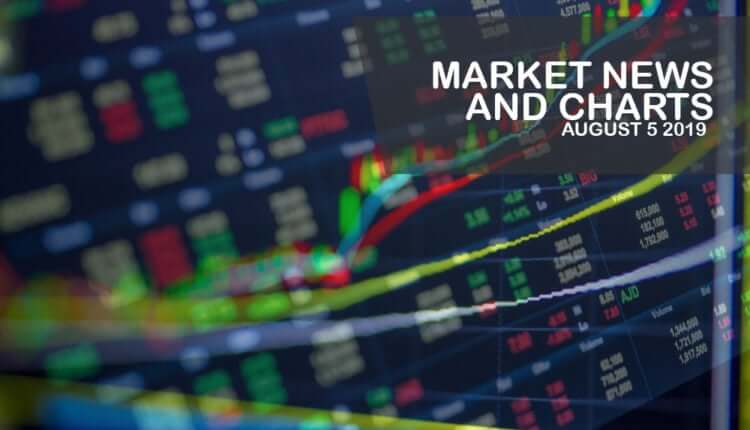 The pair failed on its 11th attempt to breakout from a major resistance line, sending the pair lower toward its previous low. There has been a lot of pressure for the European Central Bank (ECB) to create countermeasure policies against the recent interest rate cut by the Federal Reserve. The Fed lowered its benchmark interest rate by 25-basis point, its first time since the 2008 Global Financial Crisis. Aside from this, U.S. President Donald Trump had further call for another interest rate cut before the year ends. Despite this, the Euro was still likely to continue on a downtrend after President Trump imposed 10% tariff on $300 billion worth of Chinese goods to pressure the Federal Reserves and to pressure China to sign a fair trading agreement with the United States. Christine Lagarde, the former IMF (International Monetary Fund), will be the next to serve as the new ECB President after Mario Draghi.

The pair is expected to continue its steep decline after it broke down from a major support line, sending the pair lower toward its year-to-date (YTD) low. Japan is stepping up its influence in the Asia-Pacific region after U.S. President Donald Trump withdraw from the key Asian policy of his predecessor, former president Barack Obama’s pacific rim trade pact. This had pushed Japan to reinterpret the Article 9 of the Japanese Constitution, which prohibits the country from building and maintaining military equipment. Aside from this, Japan led the ratification of the CPTPP (Comprehensive and Progressive Trans-Pacific Partnership), together with Australia. Japan had also ratified the EU-Japan Free Trade Deal, which became the largest trading zone in the world. However, the country was facing backlash from South Korea, another major U.S. ally. Japan and South Korea had a bitter past that had now escalated to a full-blown trade war.

The pair was seen to further move lower on the nearest support line after it broke down from its support line. Canada staged a comeback after it shifted its focus from China and the United States to its economy, particularly that the country is a member of the pacific rim trade pact, the CPTPP (Comprehensive and Progressive Trans-Pacific Partnership). Aside from this, Canada is also weighing the advantage of signing a free trade agreement (FTA) with the European Union compared to signing the post-Brexit trade agreement. Just like Canada, New Zealand is also a member of CPTPP and a signatory of both the European FTA and post-Brexit trade agreement. However, New Zealand’s economy is both exposed to the U.S. Dollar, whom analysts warned against following its trade war with China. New Zealand is also the neighbor of Australia, which had recently entered a recession for the first time in 27 years.

The pair is expected to break down from its current support line, which will send the pair lower toward its all-time low. The United Kingdom was in a desperate position following the win of Boris Johnson, which became the leader of the Conservative Party and to an extend the new British Prime Minister. PM Johnson promised that he will pull the UK out from the European Union with or without a Brexit deal. A crashed withdrawal of the UK from the 27-member state bloc was seen by analysts to result in an economic recession, which will trigger another sell-off of the British Pound. Aside from this, the possibility of a trade deal between the United States and the United Kingdom will be the largest trade agreement that the UK will enter to and the country cannot afford to lose it. The United Kingdom last negotiated in 1972 before its accession to the European Union. The EU Institutions act on behalf of its member states.