We all know that there are a lot of brokers that are not as reliable as it seems from the first look on their website. It is an unfortunate reality that we live in. The world is full of wolves in sheep’s clothing. There are brokers that claim to provide reliable services. Along with that, there are also people who claim they speak the truth, however, have selfish intentions.

Sometimes, when a person claims that he or she is a myth-buster, it might turn out to be an exaggeration. Unfortunately, that person may be disguising themselves and playing the role of a truth-telling hero who catches villainous liars.

Japa Rico and His Virtual Pseudo-Presence

Robson Hayashida is one of those people who tries to expose scam brokers. However, his words and good intentions should be taken with a grain of salt.

Mr.Hayashida currently resides in Hong Kong. He is a well-educated businessman, as he claims on his Facebook and YouTube pages. Mr.Hayashida compares himself to other traders and says that he has been working in the area for 23 years.

Robson is the co-founder of Magario International, FutureHandling.com, CEO, business investor, IT engineer, and public relations representative. He posts a variety of information on presentations and lectures all around the world.

His primary target audience is from Portugal; thus, most of his content is in Portuguese.

Japa Rico also has a Telegram channel, that he uses to mobilize up 60,000 subscribers on its YouTube channel, whenever he needs to create a negative atmosphere around the broker that he does not like.

Mr.Hayashida also has a Facebook page where he actively talks to his naïve subscribers and makes them think that he is ultimately the only truthful source on the internet.

What’s Up with Him and His Channel?

Mr. Hayashida, also known as Japa Rico on his website and YouTube channel, proclaims himself to be the ultimate and truthful guide in the world of finance. His channel’s description states that YouTube is made by a bunch of kids who claim to be “traders,” but are just a bunch of kids who think of themselves as traders. Many of these people have never worked professionally at a bank as traders, but think they are “someone” just because they make trades and earn some change. 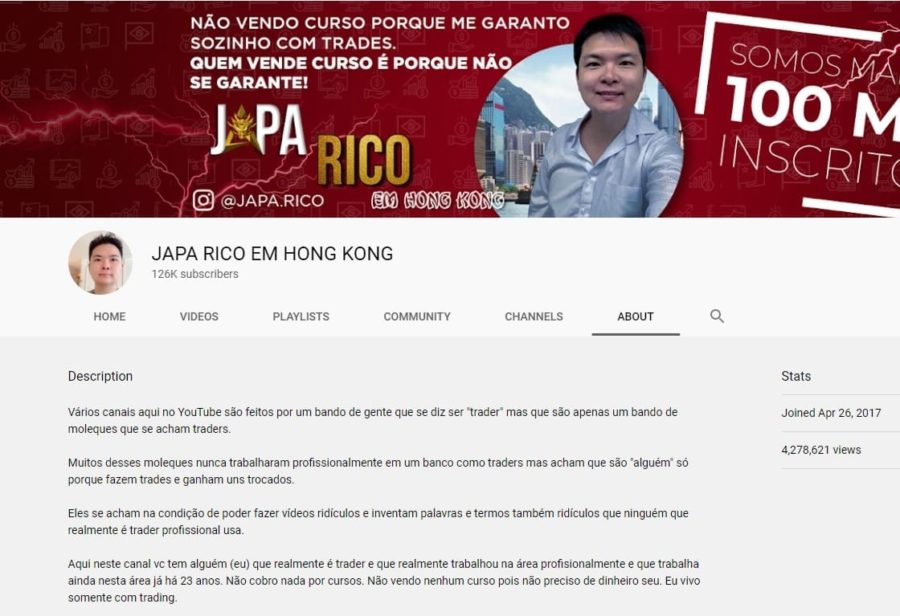 He also states that these video-makers and sometimes representatives of other brokerages are in no position to make such claims. Mr.Hayashida says that usually, these people make ridiculous videos by inventing words and terms that professional traders never use.

To say the least, these types of claims are questionable as there is no real evidence that Mr. Hayashida is not another scammer himself.

In his videos, he usually talks about his years of experience and affiliated broker companies that he works with, or even might be contracted to their sponsorship.

Here is what he says in his YouTube channel description, “I wouldn’t say I like small talk and hate the non-professional. If you want to learn from someone who is really in the field, then this is your channel.”

Before you make any type of decision yourself, do not blindly follow people on the internet. It is easy to get confused when you do not know something, especially in the world of finance.

Read, learn, and educate yourself. Use trustworthy platforms and be smarter than scammers that want to lie to you.

Why Your Money is at Risk with These Trading Platforms