Investing in Cryptocurrency vs Forex Trading

Cryptocurrency vs. forex trading? Are there really any real difference between these two? There’s a world of that, believe us. Let’s start with basic questions: what is a cryptocurrency? Is investing in cryptocurrency better than trading forex? What’s the meaning of life?

Except the last one, we’ll help you find answers. Read on!

What is a Cryptocurrency?

At first, it’s easy to dismiss a cryptocurrency as another tech wet dream for those who want to avoid banks. But it’s more than that.

A cryptocurrency has a lot of features that you cannot find in other assets.

For instance, no central authority controls a cryptocurrency. The underpinning technology makes for a flawless way of decentralization. As you can imagine, this nature opens the door and offers a whole lot of advantages.

A cryptocurrency is, practically, a bunch of unique codes. It’s math at work, and it’s very lucrative.

Thanks to Satoshi Nakamoto, the elusive and unknown inventor of bitcoin, we got our hands to the first cryptocurrency.

Although it wasn’t Nakamoto’s real goal, his invention paved the way for building a digital cash system. That was circa 2009.

Fast forward to 2019, we now have things like a crypto exchange. You may even be a bitcoin trader who wants to learn more about the asset. Who knows, right? Are you already investing in cryptocurrency?

With the rise of bitcoin, currently the most profitable cryptocurrency, comes the rise of other altcoins. Did we say it was just a wet dream? Come on, pilgrim. This is real life.

Any discussion of bitcoin and cryptocurrencies isn’t complete without touching on the subject of blockchain.

When you’re buying or selling bitcoins, your transactions are set in stone. Or, perhaps, set in digital, publicly viewable blocks.

The blockchain is a public ledger where all transactions go. It records all things happening on the network, while also keeping the users mostly anonymous as they’re investing in cryptocurrency.

This underpinning technology doesn’t only make digital coins enthusiasts go head over heels for investing in cryptocurrencies. It also offers a glimpse of what’s in store for the future of finances.

Just imagine its use cases: government processes, transportations, contracts and agreements, and many others.

Comparing it to Forex

With what we’ve said so far, you probably have an idea why cryptocurrencies are vastly different from forex.

One of their similarities, though, is that you’re dealing with a decentralized market. This means you needn’t follow the rules and regulations of a central authority figure. There’s no Big Brother in this house, y’all.

But that’s an oversimplification.

Fiat currencies have the backing of central banks. The world recognizes them as legal tenders.

Meanwhile, bitcoin and other cryptocurrencies are still trying to convince the world that they’re a thing. They’re the future of finance, they say, but they need to clear some hurdles first.

These hurdles include regulatory oversight, potential security flaws, a not-so-stable price movements, and a history of illegal usage. 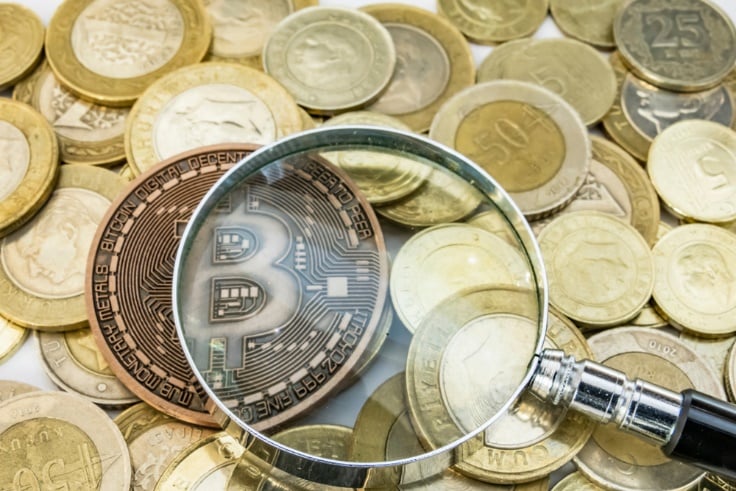 You would see rapid fluctuations in prices. But you would also see the undeniable proof that people are rooting for it.

If that’s not enough to convince you, just look at the cryptocurrency market capitalization.

If you combine all of their market cap, you’ll get a bunch of numbers we’re sure won’t fit your wallet.

The Game of Value

Of course, you can’t start being a bitcoin trader if we just said you had to.

How does a cryptocurrency, bitcoin, for instance, have value?

We got two words to answer that question: scarcity and utility.

There is a limited and scarce supply of bitcoin. Overall, there are only 21 million bitcoins. People need to “mine” these digital coins.

As time goes by, and even while more are investing in cryptocurrency, mining bitcoins become tougher.

The fewer available number of bitcoin, the higher its value. That’s simple spelling.

In that sense, cryptocurrencies are just like gold. The precious metal needs mining, there’s less and less gold left, and it’s getting difficult to mine.

The Question of Utility

But we can’t just jump in the bandwagon and be a bitcoin trader just because the supply is fewer. There’s obviously a limited supply of common sense in the world, but very few are investing in it, right?

What keeps cryptocurrencies popular and a crypto exchange running is their potential for utility.

This is where the forex market enters the picture again. It’s simple: fiat currencies rule the world. People use them every day with their transactions.

Forex trading assures you that you are trading something with real value. Fast forward to three or five years, you know that the dollar is still a thing.

Investing in cryptocurrency, on the other hand, needs you to trust that the hype for bitcoin will endure.

You will have to keep hoping cryptocurrencies turn mainstream. Until that happens, the forex market will remain the more popular of the two.

To sum up the difference of investing in cryptocurrency and forex, we can say that cryptocurrencies are still a work in progress.

The forex market’s sheer size ensures that it’s solidly liquid. It offers diversity, too, although some pairs don’t showcase profitable levels of volatility.

Perhaps the best thing about investing in cryptocurrency is the lack of institutional involvement. Banks, central banks, and regulators can all have a break.

Overall, you’ll be the judge of which is better for your trading career. What we suspect, however, is that you’ve already made up your mind. You’re planning to be a bitcoin trader.

Many traders have found their fortune in the cryptocurrency market. The key is to understand what you are getting into.

Most Traded Shares by Volume in 2020 – What to Look Out For?

What is day trading?

Crypto Trading Tricks and Tips Everyone Must Know