DOLLAR EXCHANGE RATE- The dollar exchange rate remained largely unchanged in the Asian Forex markets given the level of uncertainty currently stalking the greenback. Both currency investors and traders have taken a step back as they wait on the conclusion of the 2-day FED meeting on Wednesday and reports of the second-last leg of the China-US trade talks.

Key among the leading causes of the greenback uncertainties is the April-May FED meeting that is expected to discuss whether to hike, cut or continue holding onto the current rates. The meeting comes barely a week after the release of the United States economic data report that saw the economy record better than expected growth rates for the first quarter. Some economists believe that a rallying economic performance is enough to force the Fed’s hand into cutting down on the rates.

Others, like Michael Pierce, a senior economist at Capital Economics, however, believe that the central bank is more likely to act on forecasts and not historical economic data. He argues that “the Fed is more concerned about the economic outlook rather than what happened between January and March.” Further adding that, while the economic outlook may be positive, breaking it down paints a grim picture on the performance of key economic drivers, like the domestic demand that continues to weaken.

Proponents of sustained ‘patience’ on interest rates by the fed argue that acting on the interest rates now would be premature, given the uncertainty of the direction of the China-U.S talks.

The U.S-China talks drag on 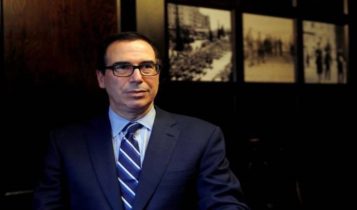 After one year of trading tariffs and sanctions worth hundreds of billions of dollars, the Trump Administration and China’s Xi Ji Ping’s team are yet to agree on terms of trade between the two economic giants. But U.S Treasury Secretary Steven Mnuchin is confident that the hard part is over and all is left is either striking a deal and lifting the sanctions or hitting a stalemate. Before jetting out of the country to China on Monday alongside President Trump’s top trade negotiator Robert E. Lighthizer to lead the negotiation delegation, Mnuchin responded to a question of how close his team is close to striking a deal by saying that “we are getting into the final laps.”

The meeting in China is expected to be the second last of the series of talks that have dragged on for over eight months with the last session expected to be held on May 8 when the Chinese delegation heads over to the U.S. Mr. Mnuchin is however confident that “both teams have the desire to reach an agreement” and that the negotiation team “has made a lot of progress.” And while he wouldn’t comment on the challenges that remain unsolved, the question of Trump’s sanction threat on all Iranian oil importers expected to take effect on May 1st sticks like a sore thumb. The round of talks and their effect on the dollar exchange rate will, therefore, be interesting given that China has already expressed its frustration and disregard of these sanctions.