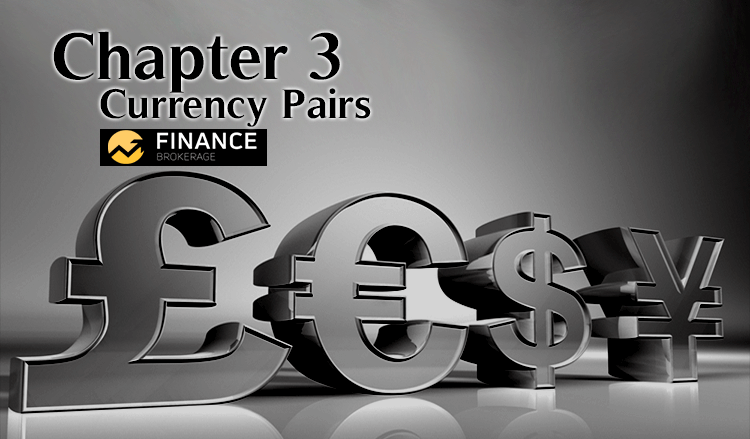 A market is nothing without its items. In the forex market, we’re shopping for currency pairs. But you wouldn’t just pick a pair just because it’s better than the other, would you? The answer is a big, fat no. Read this chapter to learn why.

There are 3 types of currency pairs.

Each type has its own aspects in trading. This raises the question “which currency pairs are best to trade?”

Continue reading to find out.

The major pairs are the most frequently traded currencies worldwide. Because they have HUGE liquidity, you can trade them virtually always. Additionally, these pairs have the lowest spreads, which means low brokerage costs.

Notice a little pattern here? That’s right. The US dollar is always present for every major pair. That is because the dollar is the world’s leading reserve currency. It’s involved in about 88% of currency trades.

When there is a major, there is always a minor. These pairs don’t include the US dollar, and they’re also known as cross currency pairs. These pairs often show more wild

swings due to less liquidity. Therefore, theirs spreads are also often wider than the major pairs. Here are few examples of minor pairs:

The most actively traded crosses are derived from the three major non-USD currencies. These are the EUR, JPY, GBP.

These are the pairs that are rarely traded in mainstream financial markets. Exotic pairs consist of on major currency paired with the currency of an emerging economy. This economy could be strong but smaller from a global perspective such as Hong Kong, Singapore, and European countries outside the Euro zone. Here are some good examples of exotic pairs:

These pairs are not traded as often as the majors or minors. Meaning, the cost of trading with these pairs can get higher than the other types of pairs due to the little or lack of liquidity.

Now that you understand the different types, it makes sense to pick a currency pair now, right?

You might be asking yourself, “Why can’t I just pick these pairs if they have narrow spreads and high liquidity?”

That’s right, narrow spreads and high liquidity are good. But you’ve already made a rookie mistake.

If you don’t know what you’re doing when trading multiple pairs simultaneously, you can just watch your account burn slowly.

Fortunately, because this is currency trading for dummies, we’ll show you why.

Trading in forex, you have to know that no currency is an island in the forex market. Currencies are always quoted in pairs. Therefore, all currency pairs are interlinked.

Currency correlation refers to whether two pairs move in the same, opposite, or random direction.

With that said, it’s very important that you understand how different pairs move in relation with each other. All the more if you’re not familiar with how currency correlations can affect the amount of risk you’re exposing.

How would you know if it’s a correlation?

But what if the other pair didn’t do anything?

A correlation coefficient ranges between -1 and +1. This is how we measure the correlation.

When you reach +1, this is a perfect positive correlation. This means that two currency pairs will move in the same direction 100% of the time.

When you reach -1, this is a perfect negative correlation. This means that two currency pairs will move in the opposite direction 100% of the time.

What if the correlation is 0?

Then the movements between two pairs have zero or no correlation at all. They are entirely independent and random from each other.

What are the possible currency pairs that correlate with each other?

GBP/USD, AUD/USD, NZD/USD, and EUR/USD are positively correlated with each other. As you can see, the counter currency is the US dollar.

Thus, any change in strength of the US dollar directly affects the pair as a whole.

USD/CHF, USD/JPY, and USD/CAD are negatively correlated pairs. As you may have notice, the base currency is the US dollar. That is the reason why they move in the opposite direction of the majors mentioned above.

Knowing which pairs move opposite and which move the same is very useful for a trader. However, it can be difficult to determine, especially the correlation in forex can change.

Currency pairs don’t just randomly move up or down by themselves. There are several factors what drive the market. And you can take advantage of them.

Non-farm payrolls refer to the data that pertains to the number of people who are employed within the US economy. The data is released every first Friday of the month.

If employment decreases significantly, then the economy is contracting. On the other hand, if employment increases, then that indicates a strong economy.

Interest rates play a huger role in the forex market. Since the central banks dictate monetary policy and supply, they are the main focus of traders.

Increases in interest rates can cause a currency to appreciate because higher rates give higher rates to lenders.Therefore, attracting more foreign capital, and as a result, a rise in exchange rates. Forex rates, interest rates, and inflation are all correlated.

Since there is a huge amount of goods and services available in a country, grouping of these products are used to measure changes in the pricing.

Increases in pricing show an increase in the inflation rate. As a result, it can devalue that country’s currency.

This is how you see the measurement for goods and services that were finished over a period of time.

These are the goods that have a lifespan of three or more years. They are measured in quantities that are ordered, shipped, or unfilled.

It’s a good indicator to determine whether there’s an economic spending or not.

Monetary flows that came from interactions between countries can affect currency prices.

When imports exceed exports, there is a chance for the currency value to drop. However, increased investments in a country can achieve opposite result.

Elections, financial crisis, monetary policy changes, wars, or anything that is happening in a country can heavily impact the forex market. A country’s political state can either attract or shun traders.

Based from all these factors, currency price moves because of all these information. That’s why in the forex market, information is king when it comes to successful trades.

And where can you find all these information?

Obviously, the internet is your prime choice. It provides rich information all across the globe in just a click.

But we strongly advise you to rely on reputable news sites.

Then there’s the television. It provides immediate access to the movements in the forex market.

Financial networks are available 24 hours a day and 7 days a week. When you want up-to-minute reports on the world’s financial market, the television is your answer.

You have CNBC, MSNBC, Bloomberg, Fox Business, and CNN as your top partners to fill your market needs. And the best part, their just a couple of buttons away on your remote!

If you don’t have a television but have an internet, you can use your forex trading platform for real-time data.

Most forex brokers include live newsfeeds in their platform. This allows you to have easy and fast access to events and news of the forex market.

Another way to keep up or be ready with all the events is checking out economic calendars.

What do they do?

It lets you see when will the Fed make an interest rate announcement, what rate is predicted, what rate actually occurs, and how does it impact on the forex market. These are all possible with an economic calendar.

Some economic calendars let you look at different months and years. They also let you sort by currency and set your local time zone.

Not all forex traders live on the same place. The time zone features will help you get ready for the next big event since 2:00 pm in Eastern Time isn’t the same in your time (if you live in a different time zone, of course).

In this chapter, we learned all about the currency pairs and what makes them move. Next, where could we find these pairs?

Why, in the market of course!

Stocks Varied on Sell Off in China as Trade Tensions Escalate

What is the SWOT analysis, and how’s it done?

Do you understand the profit/loss ratio well?