According to the report prepared by the Swiss bank UBS, there is a chance that gold prices might increase in the next several months. Based on the UBS report, gold prices can increase by more than 10% in the next 18 months. It means that the gold prices will increase to $1,680 per ounce in 2020.  During the last five years, the price of this precious metal ranged from $1,100 to $1,300.

The UBS report highlighted several factors that affected oil prices. The primary reason is the market instability as the bank pointed out that volatility has a negative impact on the global economy. It means that it is becoming harder to make plans for the future. In this situation, investors are willing to invest in gold as a precautionary measure against global economic problems. Moreover, there is a chance that gold prices might reach $1,700 an ounce in 2020. If gold surpasses this level, it will be the best result in several years.

Higher gold prices boosted the demand for this precious metal in India. It is worth mentioning that India is the second biggest gold consumer in the world. Based on the latest data, gold imports decreased by 42% to $1.71 billion in July.

According to the local jewelers, the supply of the scrap gold increased as costumers are willing to sell them due to the higher prices. Another reason is that the national currency’s exchange rate also helped to drive the gold prices higher in India. The price of rupee fell below 71.21 against the U.S. dollar. 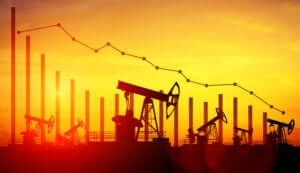 U.S. authorities warned ports in Asia not to provide services to the Chinese tanker which violated the sanctions imposed in Iran. The Iranian oil industry is under the U.S. sanctions, and countries or individuals should be careful when dealing with Iranian oil. Nevertheless, Iran is looking for options to sell its oil abroad. Based on the example of one Chinese tanker, it makes clear that the country continues to export its oil.

Let’s have a look at Chinese owned tanker Pacific Bravo. On June 5, the tanker turned off the transponder. The purpose of this transponder is to identify the location of the ship. According to U.S. officials, the ship was transporting Iranian oil. Based on the current prices, the price of the oil carried by the Pacific Bravo is about $120 million.

In more than a month starting July 18, the ship’s transponder began sending signals. However, the new name of the vessel was Latin Venture. Nevertheless, both of the ships had the same unique identification number. Based on this number, it became clear that Latin Venture and Pacific Bravo are the same ship. This indicates that owner of the ship tried to hide the fact its ship was transporting Iranian oil.