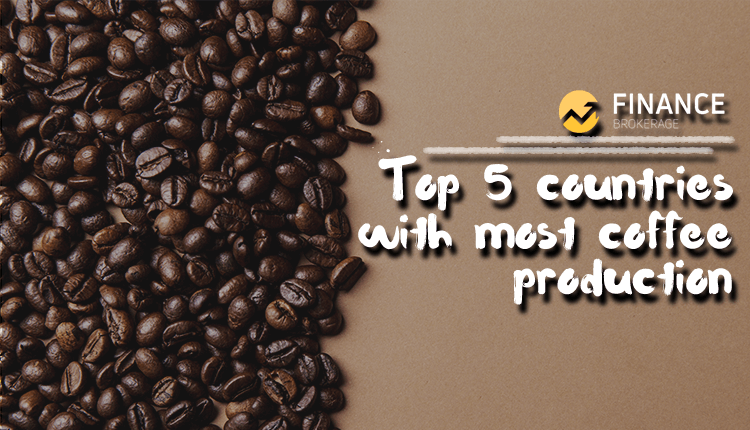 In the coffee industry, only a few nations are known by the majority. Fact is, the majority might not know the top producing nations. A coffee tree grows in climate conditions between the Tropics of Cancer and Capricorn. It needs just the right climate in order to grow. There are about 70 countries producing coffee.

In this post, you’ll know the top five coffee-producing nations globally. Take note of each and know how much percentage they can produce individually.

In the continued development of Brazil, coffee production is one of the central keys that drives the country’s economy. During the 18th century, French settlers initially brought the coffee plant to Brazil. As it booms in popularity for the Europeans, the country immediately becomes the largest producer globally, since 1840 and still is today.

The United States Department of Agriculture’s Foreign Agricultural Service analyzes the yearly production of coffee globally. In the 2017&2018 crop, Brazil produces about 3.05 million metric tons of coffee. That is more than 30% of the world’s production. In more than 10,000 square miles of Brazilian landscape, 300,000 plantations are operating.

Vietnam is in a way new to the international coffee trade. Despite that, it also quickly consider one of the largest producers globally. During the 1980s, the Communist Party believes in the capability of their coffee production. Since then, every year in the 1990s increases by 20% to 30%. Therefore, that mainly transforms Vietnam’s economy. About 1.76 million metric tons of coffee were produced in the 2017&2019 crop.

The country currently focuses on less expensive robusta beans. Vietnam thinks of it as a niche within the international market. The robusta bean can produce double the caffeine, which makes the coffee taste more bitter. For a cheaper/affordable cup of coffee, choose to buy a coffee made with Vietnamese coffee beans. Vietnam is the top producer of robusta coffee worldwide. The country holds more than 40% of the global production in the 2017&2019 crop.

Colombia is one of the most popular coffee-producing nations. Their popular advertising featuring a fictional farmer – Juan Valdez brings the company to its popularity. The advertising campaign is by the National Federation of Coffee Growers in Colombia. The country is known for its coffee product quality. In the 2017&2018 crop, they produce 864,000 metric tons of coffee.

During the years 2008 and 2009, because of heavy rains, Colombian coffee crops are hit by a leaf disease also known as coffee rust. The country’s production drops by around 40%. However, the country replaces its trees with rust-resistant varieties. The country is now in the second highest-producing nation of arabica beans. Millions around the globe prefer the country’s mild and well-balanced flavor.

The country’s climate and location help in bringing them to the third-largest robusta beans producer worldwide. Indonesia isn’t well-known compare with the other nations as a coffee-producing country. A total of 636,00 metric tons of robusta and arabica coffee bean in the 2017&2019 crop years. The country’s coffee industry holds about 1.5 million independent farms and a few large-scale operations.

The country produces a  variety of highly searched specialty coffees. One of which is the Kopi Luwak. Kopi Luwak harvested in the feces of Asian palm civets have a precisely unique flavor, considered as the most expensive coffee beans worldwide with an intensive process of harvesting.

The country produces about 450,000 metric tons of coffee in the 2017&2019 crop year. Honduras is the third-largest producer in Latin America. The country at large produce various specialty coffee. Their 2016&2017 export increases by about 145% compared with the previous year. With the amount of growing area in the country, it advances in the global market. A 3,000-foot minimum altitude requirement for their special coffee crop designations.