On Monday, Trump said he would meet with Xi Jinping – Chinese president at a G20 summit in Japan late next month.

Earlier, China said it would raise tariffs on a range of U.S. goods including frozen vegetables and liquefied natural gas. The move followed Washington’s decision last week to hike its own levies on $200 billion in Chinese imports.

The U.S. Trade Representative’s office also said it planned to hold a public hearing next month on the possibility of imposing duties of up to 25% on a further $300 billion worth of imports from China.

On Tuesday, the offshore yuan weakened to 6.9200 per dollar, its lowest against the greenback since late December. It booked its steepest single-session decline in nine months overnight, giving up nearly 1%.

The dollar index against a basket of six rivals was slightly lower at 97.281, having ended the previous session little changed.

Against the Japanese yen, the dollar edged up to 109.42 yen, recovering slightly after falling as low as 109.15 yen in early trade.

The dollar remained within striking distance of a more than the three-month low of 109.02 yen brushed during the previous session when it shed nearly 0.6%.

The Japanese currency tends to benefit during geopolitical or financial stress as Japan is the world’s biggest creditor nation.

The Australian dollar tacked on 0.2% to $0.6958, having hit its weakest against the greenback since early January overnight. 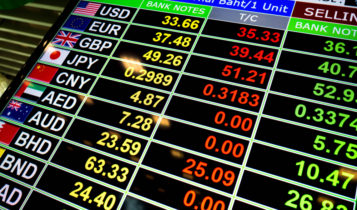 On Tuesday, Foreign exchange markets are correcting some of Monday’s sharp movements in early trade in Europe. The markets are slowly absorbing the shock of the trade war escalation between the U.S and China.

At 03:00 AM ET (0700 GMT), the dollar index was at 97.115, with the dollar giving up some of its gains against the euro. Risk-proxy currencies such as the Aussie, while clew back its losses against the yen.

On Monday, the index had hit a three-week low of 96.822 as investors fled the U.S. equity market in search of safe havens. They raised their bets on the Fed cutting interest rates this year.

On Monday, The yield on the two-year Treasury note fell eight basis points on to 2.19%. It’s now clearly below even the bottom end of the targeted Fed Funds rate of 2.25%-2.50%.

New York Fed President John Williams said in a speech on Monday that the low-interest rate environment is likely to persist for years. However, but gave no clearer hints about how the Fed will react to the latest trade developments.

Fed chairman Jerome Powell had called the trade dispute one of the key risks to the economy at his last press conference.