6 Effects of the U.S. Mid Elections to Investors

Following the unexpected winning of Donald Trump in the 2016 presidential elections, investors, who went along with the bull market, are searching for new hints on the possible effects of the upcoming US midterm elections, which will happen on November 6, on stocks.

According to Goldman Sachs, the voting is expected to turn over the control of the House to the Democrats and make the Republicans have a slimmer majority in the Senate. As a result, this could bring increased political and stock market tensions due to its sharp odds in lifting the probability that the Congress would miss deadlines on spending authorization and the debt limit would increase.

There’s also a possibility it could reduce the chance of stocks going for a rally in the fourth quarter as they frequently do after the midterms.

“Fiscal compromise will become more challenging. As a result, these deadlines would pose a risk for financial markets. Fiscal concerns weighed on equity prices under a divided government in 2011 and 2013,” Goldman said.

According to Goldman, here are the six biggest impacts of a divided Congress after the US midterm elections.

Now, what we can derive from this information?

There are three different sources from where the expectation of Goldman regarding a divided Congress was based on namely: their own Washington-based political economists, their consensus among their own clients, and the odds derived from the prediction markets. Goldman is confident that most consequences are escalating investigations along with further uncertainty regarding meeting the deadlines that are essential for the prevention of shutdowns in the federal government.

Based on the report, policy uncertainty has been historically at high levels amid the previous two years. However, it is not higher compared to that in the run-up to this upcoming election this year. Prior to the midterm election, volatility, however, was unable to undergo an additional uptick. According to Goldman’s observation, the market typically rallies in the fourth quarter of midterm election years as well as the resolution of uncertainties as presented by Goldman Sachs in the table below. But, this year, they are anticipating that there would be no uncertainties hence, reducing the probability of the pattern to happen again. 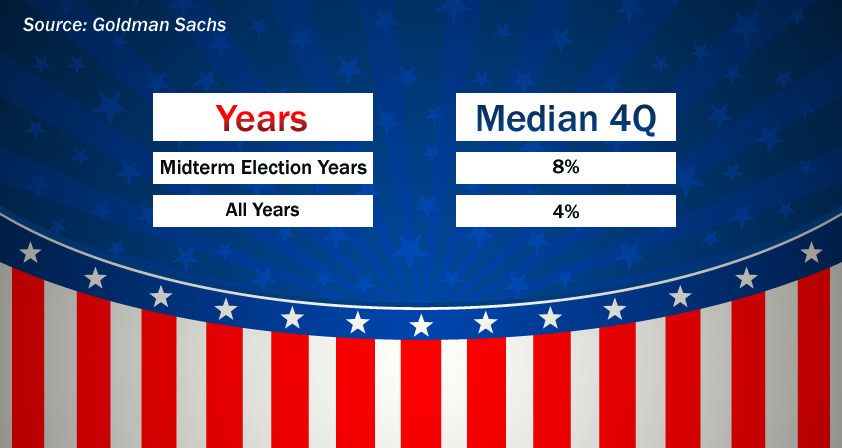 Goldman said if the Democrats would take control of both the House and the Senate, they would probably focus on the creation of health care policy and legislation that might inflict damage to the profits of the pharmaceutical industry.

However, in the case of a divided Congress, Goldman believes that legislation affecting drug pricing will not be pursued.

“The market does not expect a major tightening of fiscal policy,” Goldman justified, highlighting the continuous decline of aerospace and defense.

What should we expect?

As per Goldman, trade tensions appear “unlikely to be resolved in the near future,” regardless of the results in the election. Goldman said that the lack of political consensus and the veto power of the president won’t produce positive efforts.

“In fact, market pricing suggests that the China-U.S. trade conflict is worsening: A basket of U.S. stocks with high China sales has underperformed the S&P 500 Index by 400 basis points this month, and a basket of China stocks with high U.S. sales has lagged local peers by a similar magnitude,” Goldman added.