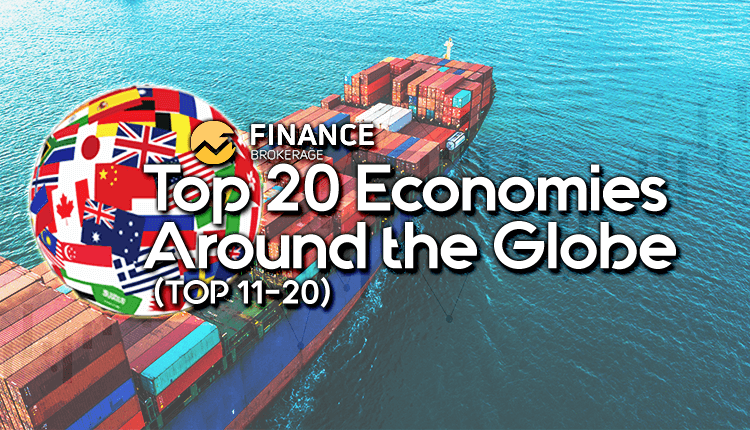 To continue our list, we’ll start off this post from our eleventh going straight down to the twentieth top economy.

South Korea is well-known for product brands including Samsung and Hyundai. The country’s economy landed on the 11th spot with a nominal GDP of $1.53 trillion. South Korea has made incredible growth in the past decades by establishing itself as a high-tech industrial nation. For the past four decades, the country has shown incredible economic progress and global unification in becoming a high-tech industrialized economy.

In the 1960s the country’s GDP per capita was included in the poorer countries in the world yet now at the 29th spot with $29,981. South Korea came in the trillion-dollar club during 2004 driven by the international trade and industrialization.

One of the largest country worldwide when it comes to the landmass and now the 12th-largest economy around the globe with a nominal GDP of $1.52 trillion. When it comes to Russia’s GDP (PPP), the company lands on the sixth spot with $4.01 trillion. In the 1990s Russian economy had a rough time, after inheriting a devastating industrial and agricultural section with their main and centric planned economy. On the next decades of Russian economy, it has shown growth at a healthy pace with 7%, in which the growth was due to a commodity boom.

The 13th largest economy with a nominal GDP around $1.38 trillion. The Australian economy grew towards a healthier one for the past two decades from a high unemployment rate and low public debt and inflation, exports and strong service industry with a stable financial system. Knowing that Australia is rich in land and natural resources, the country also a major exporter of energy, natural resources, and food. The economy of Australia is expected to come close to $2 trillion marks by the year 2023, and their GDP PPP, currently at $1.24 trillion will come close to $1.65 trillion at the same time.

The 14th largest economy around the globe. Spain is the fourth largest economy in the Eurozone. With a population of 46.6 million, the country saw a long recessionary timeline (2nd quarter of the year 2008 till 3rd quarter of the year 2013) with slow recovery on their tourism records and exports with domestic consumption. The country of Spain replaced the United Kingdom and became the 2nd most visited country worldwide.

The largest economy in Southeast Asia and landing on the 16th spot of the largest economy worldwide. The country’s economy provided tremendous progress within the last two decades. Indonesia then was a victim of the Asian financial crisis during 1997, but it has shown charted growth since. Indonesian economy was now part of the trillion-dollar club with nominal GDP around $1.01 trillion. Their GDP per capita as of now is $3, 875 which is way higher than their 2000 record of $857.

Turkey reach the spot of getting the 17th largest economy worldwide. The country’s middle-class increased from 18% towards 41% of the population in the years 1993 and 2010. The country economy is estimated to join the trillion-dollar club by 2020 with GDP (PPP) reaching $3.05 trillion in 2023. Turkey has been growing at an impressive pace since the year 2000, propelled by both industry and services.